A turret that shoots lasers

Laser turrets[1] are obstacles that appear in Shadow the Hedgehog. They are weapon defenses utilized by GUN forces.

Laser turrets are rather simple, dome-shaped turrets stuck to the ground that shoot out pink lasers. They are used by GUN bases to ward off intruders and enemies.

Laser turrets are only encountered in GUN-based Stages, like the Air Fleet. In gameplay, they shoot out moving lasers that obstruct the player's path. If touched, the lasers will harm the player. However, laser turrets move in a very predictable pattern and are rather slow, making them easy to avoid. 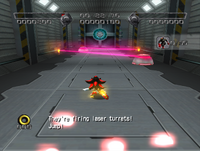 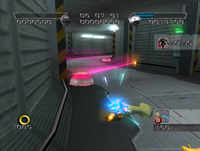