watch 02:34
Wiki Targeted (Games)
Do you like this video?
Play Sound

The Lake of Rings.

The Lake of Rings,[2] also referred to as the Power Ring Pool,[1] is a location that appears in the Sonic the Hedgehog television series. It is a lake nearby Knothole Village that produces Power Rings for the Knothole Freedom Fighters.

Lake of Rings is a small pool of water near Knothole Village. Its superficial appearance has varied over the course of the series though. When first introduced, the lake was very small and almost round in shape. It also had a single and thick hollowed out tree trunk that extended above it. Later, during the majority of the first half of the series, the Lake of Rings became much larger and had a small rocky waterfall feeding water into it. It also had a long tree trunk lying on its coast that extended into the lake. During the second half of the series, the Lake of Rings became a much smaller and rounder pool of water, being more of a recess in some rocky ground. Water was fed into it by small brooks that flew down from water pools on the upper plateaus surrounding the lake.

On the bottom of the lake is a machine containing the Power Rock. It is this machine that makes the lake produce Power Rings.[1] The lake could initially only produce a Power Ring every twenty-fourth hour, but this would later be increased to every twelfth hour.[3][1] When the Lake of Rings is about to produce a Power Ring, it emits a golden light that breaks through the water surface. It is then followed up by a Power Ring lifting itself up from the water. Sometimes, the Power Ring's emergence is accompanied by a water sprout or vortex.[4]

Sonic, Rotor and Tails once came to the Lake of Rings for a Power Ring. Held by Rotor, Tails pulled the Power Ring away from the lake when it emerged, which he then passed on to Sonic.[5] Sonic, Tails and Rotor later returned to the lake where they awaited the emergence of a Power Ring for Sonic, who needed it to rescue Sally from Robotropolis. After Tails took the Power Ring when it emerged, Rotor grabbed him so he would not fall into the lake. Sonic then took the Power Ring and ran towards Robotropolis to save Sally. Later, Tails would sit at the Lake of Rings, depressed over how Sonic ignored his warning about the fake Sally. However, he was comforted by the real Sally when she showed up at the Lake of Rings.[6] Rotor was later at the Lake of Rings when Antoine came and began talking about how Sally kept ignoring him due to Sonic. Before leaving though, Rotor accidently gave Antoine the idea of ​​capturing Dr. Robotnik to impress Sally. As such, Antoine stole a Power Ring from the Lake of Rings for a plan to bait Robotnik. However, he left some Power Ring particles on the stick he used to pull the Power Ring out of the lake. When Sonic and his friends later discovered this stick and realized what Antoine was doing, Sonic ran off to stop Antoine.[3]

While Griff was in Knothole Village, Sally showed him the Lake of Rings. When Antoine fell asleep while on guard duty however, Griff jumped into the lake and stole the Power Rock from it. When Sonic, Sally and Antoine later arrived at the lake, they noticed the Power Rock was gone. Sonic soon recovered the Power Rock, though he gave a fragment of it to Griff.[1]

Sonic later came to the Lake of Rings to get a Power Ring needed to restore the free will of his roboticized Uncle Chuck. After Tails got the Power Ring for Sonic, Sally tried to warn Sonic about how reckless his plan was. Sonic ignored her however, and left the Lake of Rings for Robotropolis. Later, Sonic and Sally came to the lake to await another Power Ring that Sonic needed to catch up with the roboticized Chuck, who had kidnapped Tails and Antoine.[2] Later, Tails flew quickly to Lake of Rings, with Sally and Chuck right behind him, in order to get the lake's latest Power Ring, which the heroes planned to resture Sonic's memory with after he got hit by the Memory Scrambler. In the end, Tails managed to grab the Power Ring in time and give it to Sally.[4] Sally later came to the Lake of Rings to grieve about her father after getting to see him again for the first time in over a decade, only to lose him again. Fortunately, Sonic came and cheered her up.[7] Some time after, Sonic would wait by the lake for another Power Ring in the company of Antoine who bragged about his recent accomplishment on their latest him. Sally, feeling Antoine deserved praise, proceeded to kiss Antoine on the cheek, much to Sonic's disgust.[8]

In the Sonic the Hedgehog comic series and its spin-offs published by Archie Comics, the Lake of Rings was a body of water from which generated Power Rings appeared due to the Ring Forge thrown into the lake by Nate Morgan. The Knothole Freedom Fighters often collected Rings from the lake for their own use; someone was usually left to watch over the lake and retrieve its daily generated ring. The site was eventually destroyed; however, a recreation was made in New Mobotropolis in the Julayla Memorial Park.

After the Super Genesis Wave rebooted the multiverse, the Lake of Rings became a naturally occurring pool of Ring-generating waters that could be found all over Sonic's World. 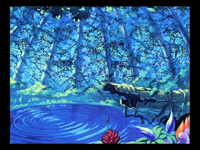 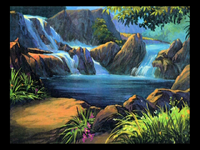 Retrieved from "https://sonic.fandom.com/wiki/Lake_of_Rings_(SatAM)?oldid=2370659"
Community content is available under CC-BY-SA unless otherwise noted.