Sonic News Network
Register
Don't have an account?
Sign In
Advertisement
in: Articles in need of expanding, Citation needed, Sonic the Hedgehog (1991) Zones,
and 2 more

A submerged maze of ancient ruins.

Explore an intricate maze filled with water. A countdown begins to let you know when you are running out of oxygen. Breathing in air bubbles keeps you from drowning.

Labyrinth Zone (ラビリンスゾーン[2], Rabirinsuzōn?) is the fourth Zone in the original Sonic the Hedgehog. As with other Zones in the game, Labyrinth Zone is composed on three Acts, with a battle against the boss at the end of the third.

Labyrinth Zone is a large, underwater cave system located somewhere on South Island. It is full of orange stone, some of which appears polished. Additionally, plants and crystals decore the Zone.

Labyrinth Zone was one of the many regions on South Island affected by Dr. Robotnik during his quest for the six Chaos Emeralds. There, the doctor kidnapped the local Animals and used some of them to power his Badniks, while leaving the rest of them in huge Capsules. When Sonic the Hedgehog arrived at the Zone however, he saved the Animals and followed Robotnik in his Egg Mobile through the exit of the caves.

Labyrinth Zone is a slow-paced and straightforward Zone, with most of the action taking place underwater. The most dangerous threat here is the fact that the playable character can drown while underwater, meaning that they can only be submerged a short period of time unless they utilize air bubbles.

The main hazards in Labyrinth Zone are swinging iron balls and spikes, which frequently appear. The player can also stand on some blocks to make them fall down. There are also ocassionally Switches that allow the player to open gates to progress. Small platforms on moving chains also appear, working as small elevators. Commonly, gargoyle-like statues may also appear, which shoot small projectiles that will damage the playable character. There are also sections where the player automatically spins through long corridors. Some of these also feature iron balls, which can be avoided by grabbing onto poles and moving out of the iron balls' path.

The Labyrinth Zone boss is Dr. Robotnik in his Egg Mobile. Robotnik himself makes his escape through a narrow vertical corridor laced with spears and other traps. Water is rapidly filling the passage from below, so dodge the obstacles and keep moving up. Survive all the way to the surface where Robotnik is helpless.

In Sonic the Hedgehog (8-bit), Labyrinth Zone appears as the fourth Zone in the game. Most obstacles remain intact, though the level design and boss have been done from scratch.

In Sonic Drift, Labyrinth Zone (named Labyrinth) is the third track of the game, following Spring Yard and preceding Star Light (as in its original appearance).

In the Sonic the Hedgehog promotional comic, Labyrinth Zone was where Sonic ended up in after getting out of the Warp of Confusion with one Chaos Emerald. There, he found Dr. Ivo Robotnik, whom he followed through the caves to Starlight Zone.

In the Adventures of Sonic the Hedgehog television series, Labyrinth is an underwater city in Mobius, ruled by King Saline. At some point, Dr. Ivo Robotnik tried to invade the city in his quest for the Power Pearls to conquer Mobius, only to be stopped by Sonic, Tails and Surff.

In Sonic the Comic, the Labyrinth Zone appears as a network of tunnels dug by Badniks (lead by Arachbot) underneath half of planet Mobius.

In the Sonic X comic series published by Archie Comics, Labyrinth Zone appears as part of a virtual world resembling the original Sonic the Hedgehog. Sonic, Amy, Knuckles and Rouge once traveled through the Zone.

In the Sonic the Hedgehog comic series published by Archie Comics, Labyrinth Zone was a Zone formed by Dr. Eggman during Operation: Clean Sweep. Sonic, Sally, Rotor, and Antoine traveled through the Zone after defeating Dr. Eggman in Marble Zone.

After the Super Genesis Wave re-wrote history, Labyrinth Zone became a permanent part of Sonic's World, with a history virtually identical to its game counterpart. 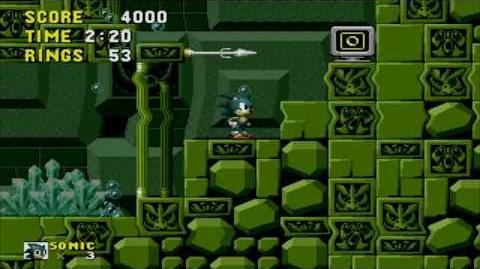 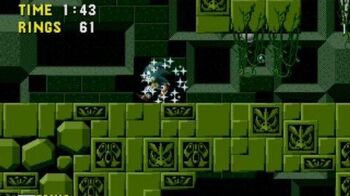 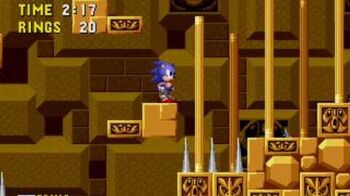