Captain Whisker and his pirate crew

Kylok (キロック, Kirokku?) is a character that appears in the Sonic the Hedgehog series. He is an anthropomorphic koala from Blaze's world and a member of the Coconut Crew youth association from Southern Island.

On Southern Island, talking to Kylok allows the player to access the Movie Theater where they can watch the game's cutscenes. By clearing missions for Kylok, the player will unlock more cutscenes.

For a long time, Kylok has lived on his own island to the east of Southern Island. Years prior to Sonic Rush Adventure, Kylok met Marine and came to know her well.

In Sonic Rush Adventure, Kylok found Sonic, Tails, Blaze and Marine arriving on his island. He initially remained nervously suspicious of the visitors until he recognized Marine amongst them, noticing to his amusement that Marine had not change since he last saw her.

After introductions had been made, the heroes told Kylok about the rumors of the ghost ships, and he remarked that he had heard about those rumors as well. However, Kylok was somewhat hesitant to tell them any more, since Marine was afraid of ghosts, but she convinced him (after making a scene) to tell them anyway, and Kylok told the group that the ghost ship was located to the east of his island. As the heroes left, Kylok was concerned for Marine, but he understood that it was Marine's dream to see the world with her own eyes. Kylok then decided to return to Southern Island for a while. 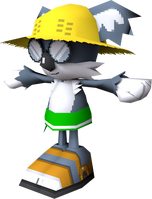