A one-on-one battle with Knuckles, who attacks by gliding, Spin Dashing, and falling. Attack Knuckles' head and/or feet a total of six times to win.

Knuckles the Echidna is the fourth boss in Sonic the Hedgehog Pocket Adventure. He is fought at the end of Aquatic Relix Zone Act 2.

During this battle, Knuckles fights with all of his trademark maneuvers: he will guard with a flurry of punches, glide through the air, and Spin Dash. Trying to attack while he is guarding will get Sonic knocked backwards. The best time to hit him is in between punches and before he jumps. After just six hits, Knuckles will be defeated.

After the battle, Knuckles will fall to the ground and drop the purple Chaos Emerald. Just as Sonic tries to get the Emerald, Dr. Robotnik crashes into the arena and steals it. With the walls crumbling around them, Knuckles summons the last of his strength and delivers an uppercut to Sonic, sending the hedgehog flying up to Tails in the Tornado, and into the next zone. 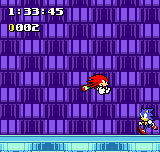 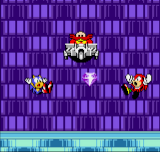 Sonic and Knuckles as Dr. Robotnik steals the Chaos Emerald