Knuckles the Echidna, from Sonic the Hedgehog 2 (film).

Knuckles the Echidna[2] is a character that appears in the Sonic the Hedgehog film series produced by Paramount Pictures. He is an anthropomorphic echidna with the power of super strength who has allied himself with Dr. Robotnik.

When having to voice Knuckles, Idris Elba looked to mine for backstory and identity, and find "everything that an actor needs in order to create a character and a kind of craft performance". According to director Jeff Fowler, Elba was eager to absorb it all, and workshop Knuckles into the best version of the character. In Fowler's own words, Elba "absolutely nailed it" when voicing Knuckles.[3]

When it came to including Knuckles in Sonic the Hedgehog 2, Fowler took Knuckles as seriously as Elba did. Accordingly, "Knuckles provides me with plenty of opportunities to just go hog wild with spectacle". Fowler also described Knuckles as someone "who has power, and in his many ways is just better suited for combat than Sonic is" and "whose entire existence is about honor and about being a warrior". Fowler considers that a difficult challenge for Sonic because, as of the end of Sonic the Hedgehog, "Sonic has been in one fight". Fowler would futher state "that does not turn you into a superhero overnight". Because of this, there is an interesting dynamic in the movie "where Knuckles is just a force of nature, and Sonic is out of his element at first because Knuckles is just more than he can handle". To Fowler, this dynamic between Sonic and Knuckles creates a dramatic sort of material and a great foundation to build a movie story around.[3]

The inclusion of more iconic moments and elements from the Sonic series in Sonic the Hedgehog 2 also influenced Knuckles’ personality. In an interview, Fowler described him as “a heavy, and really just making him the badass that he is in the earliest versions of him, going all the way back to the ’90s". Combining this with the visuals of iconic and familiar moments of action from the Sonic series, is something that Fowler says he would "attribute to the Sonic-ness of it all".[3]

Knuckles is an anthropomorphic echidna with predominantly red fur that covers most of his body, a black and pointy nose on his peach-furred muzzle, a white crescent-shaped patch of fur on his chest, and purple eyes. He also has seven dreadlock-like spines around the sides and back of his head, broad shoulders, and a medium-sized, tri-crooked tail.

For attire, Knuckles wears two large white boxing gloves with spikes attached to them. He also wears red and yellow shoes, each with green cuffs, light gray soles, and a gray, hextuple-bolted plate on top.

Knuckles is described as being serious in nature, yet still gullible at times.[2] Being better suited for combat than Sonic in many ways, his entire existence is about honor and about being a warrior, to the point where he appears to be a force of nature.[3] He is also somewhat overconfident, claiming that he does not need Sonic's powers because he has his own.[4]

Knuckles has the ability to glide and climb walls.[2] He is also quite physically strong, being capable of holding back Sonic's bio-electrically enhanced spin attack with just one hand. His hands and gloves also appear to be quite durable, as he is able to hold Sonic in place while he is actively spinning without getting any friction burns. In addition, like Sonic, he appears capable of charging himself with bio-electrical energy, which he can channel into his hands and create shockwaves of energy when hammering into a surface.[4] 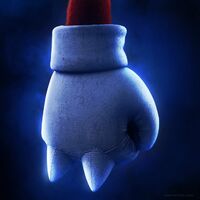