Knuckles the Echidna, from Sonic the Hedgehog #166.

Knuckles the Echidna is a character that appears in the Sonic the Hedgehog comic series and its spin-offs published by Archie Comics. He is the Light Mobius counterpart of Mobius Prime's Knuckles the Echidna. He is also Julie-Su's soul mate and Lara-Su's father.

Knuckles has gone through a radical design change, the most notable of which is that he wears clothes now and his mechanical eye. His new change consists of his ancestor Hawking's cowboy hat, a brown jacket and matching belt and boots, mittens much like his old ones but with zips on them, black pants, and a black top decorated with his birthmark.

Prior to Mobius: 25 Years Later

Before the events of MxYL, Knuckles became Chaos Knuckles once again, and killed Dr. Eggman. After this, he attempted to recreate the world as he saw fit. In order to stop him, Sonic attempted to use an alien device to turn him back to normal. However, Sonic did not know how to use the device, and while it did turn Knuckles back, it ruined his right eye, which he replaced with a biomechanical eye. The technology to replace his eye was apparently developed sometime afterward, but Knuckles chose to retain the mechanical eye on account of its useful features, such as infrared vision. Prior to these events, Knuckles' father Locke came down with a condition which resulted in his death, but not before he admitted that he had been wrong in his methods of raising Knuckles and that his love for his son mattered more to him than anything else.

During this time, Knuckles and Sonic are downright hostile to each other, though their wives are able to convince them to have a small gathering at the pool. Prior to this gathering of their two families on Angel Island, Knuckles held an Unveiling party for Lara-Su, despite her protests and desire to become the next Guardian. Despite the conflict, the two enjoyed the party, though Knuckles found himself facing the melancholy of a parent with a child entering into adulthood. However, Knuckles finds out from Cobar and Rotor that Mobius is destabilizing, and could cease to exist if something isn't done. Knuckles shares this information with Tails and Sonic, and a solution is reached. It is decided that Sonic and Knuckles would go back in time to save Mobius. Before they go, Knuckles deems Lara-Su the new Guardian, having changed his mind after visiting his father's grave-site and remembering their final days together. However, the status quo of the timeline is forever changed...

In the altered timeline, Knuckles is King Shadow's brutal enforcer and leader of the Chaotix, with seemingly no memories of the original timeline. When approached by Tails about the drastic changes, Knuckles bluntly refuses to get involved. He arrests Tails, Lara-Su, and the former King Sonic when the Dark Eyes discover that the three plan to overthrow King Shadow. He locks the three of them in the catacombs underneath Castle Acorn, along with a rather beaten Rotor.

However, while they are in prison, Knuckles reveals that he remembers the original timeline, and was just waiting for the right time to overthrow the tyrannical king. Deciding that this was the right time, he set the four prisoners free, allowing Tails to disable Castle Acorn's security system, Lara-Su to get Rotor to safety, and Sonic to face Shadow while Knuckles leads Queen Sally away from the throne room. Although Shadow defeats Sonic, he is soon after defeated by Lara-Su, who then walks out on the arm of her proud father, who says "Your mother's going to flip when she finds out you defeated King Shadow". (StH: #166, #167)

Five years afterward, Knuckles is given a mission along with Julie-Su, Mace, and Vector to try and make peace with the Mazuri Separatists, and left Lara-Su to "take care of things" before leaving, Julie asked Lara-Su if she was sure she could handle things, to which she confidently replies that she could. After a couple of hours of hectic baby-sitting with the royal twins, Lara-Su called her parents asking how things were going, to which they replied if Mace and Vector were successful, they would be able to talk to Bill. Lara-Su then gave them her love before she had to hang up to rein in Manik and Sonia to bed again.

Knuckles' personality has not changed much over the years. He is still rather aggressive and hot-headed, though he doesn't show it as much. He is downright hostile towards Sonic, though he is able to act civil during group affairs. He is very protective of his daughter, Lara-Su. However, he can be somewhat over-protective, as he refused her pleas to allow her to become the next Guardian. This was, however, to protect her from the trials and tribulations he went through as Guardian. After the changes in the timeline, Knuckles becomes the brutal enforcer of King Shadow, completely loyal to the King. This was however just a ruse for until he could overthrow Shadow. After Lara defeated Shadow, Knuckles had gained complete faith in his daughter. 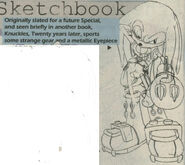