Various members of the Knuckles Clan, from Sonic Adventure.

The Knuckles Clan (ナックルズ族[1], Nakkuruzu-zoku?, lit. "Knuckles group"), also known as the Knuckles tribe,[2] is a group that appears in the Sonic the Hedgehog series. It was a race of echidnas that lived over 4,000 years ago in what would become the Mystic Ruins,[3] and the ancestors of Knuckles the Echidna. After an era of bloody war efforts, the clan was virtually wiped out when they incurred the wrath of Chaos. Though remnants of the clan remained, most of them would die out in the centuries that followed.

The men of the Knuckles Clan sport white, intricate tattoos on their heads and arms and have gloves similar to those of Knuckles. The men are also the only members of the tribe to possess the spiky protrusions/knuckles from their gloves. The women primarily work on agricultural/domestic projects, staying at home to clean and care for the children. Only males wear boxing gloves. Females wear normal gloves, like Sonic, and have visible fingers.

During Chief Pachacamac's rule, the Knuckles Clan were very warlike and hungry for conquest, and took delight in pillaging and razing villages to the ground. War would bring one great honor. They were also very patriarchal, with the men seemingly dominating all aspects of life, both domestic and public, and especially political.

The Knuckles Clan echidnas appear to worship the serpent, and incorporated it into their architecture of the Shrine and pillars, but not everyday folks' homes. Also, many of the doors inside and out of the Shrine is the shape of a fanged snake's mouth. All of the designs were very detailed, and were used to decorate many buildings and pillars, as well as the eyes of the snake-doors and entrance to the Altar of Emerald. The Knuckles Clan also held the Chaos Emeralds in reverence, such as in the ancient recitation.

The Knuckles Clan were a chiefdom in political organization, being ruled by a chieftain. There was no democracy, and the ruler was absolute in the chief's authority. Interestingly, the Knuckles Clan appeared to be both peaceful and matriarchal before the rise of Pachacamac. The former chief, Tikal's grandmother, was very wise and loving and unwavering in her devotion to peace. Pachacamac, however, turned the Clan into a band of murderous warriors and bandits, subjugating neighboring tribes to their barbaric rule. In a short time, Pachacamac quickly turned his nation into a force to be reckoned with.

In the centuries prior to their downfall, the Knuckles Clan had been living in peace. During their time, they established a city close to the Altar of the Emerald, where the Chaos Emeralds, the Master Emerald, and a Chao colony resided.

Rise and fall of the Knuckles Clan

Pachacamac inherited the leadership of the clan from his mother. Unlike the peaceful chief before him, Pachacamac yearned to expand the Knuckles Clan's small kingdom, and so made his move after his predecessor's death. Evolving the Knuckles Clan into a body of war, Pachacamac led a series of swift conquests of the neighboring countries, plundering and killing everyone. As a result, the Knuckles Clan's empire grew significantly in size and wealth.[4][5] Growing steadily greedier and more arrogant as time went on, the Knuckles Clan dreamt of having their empire encompass the world.[6] However, they were unable to take control of the nearby altar and its Emeralds, as a mysterious force kept them at bay.[5][7] While the majority of the Knuckles Clan supported Pachacamac for the wealth and power he had given them, Pachacamac's peace-loving daughter Tikal severely opposed her father's warmongering.[4][8]

In a supposed act of desperation in the face of his clan's destruction, Pachacamac sought to steal the Chaos Emeralds and the Master Emerald from the Altar of the Emerald by force, believing they were the keys to the Knuckles Clan's survival and continued victories.[9] However, Tikal, who had befriended the Chao and their guardian Chaos at the altar, pleaded him not to go through with his plan.

Despite her daughter's pleads, Pachacamac orchestrated a violent attack on the altar with his warriors, where Tikal and the local Chao tried to stop their theft. Pachacamac, however, ignored Tikal's pleas for a peaceful resolution and had his men trample over them. This profound act of indiscrimination enraged Chaos, corrupting it with anger. In retaliation, it transformed into Perfect Chaos with the negative energy of the Chaos Emeralds. Killing Pachacamac and his men, Chaos laid waste to the Knuckles Clan civilization and wiped out nearly the whole clan overnight. Before Chaos could destroy the rest of the world, Tikal sealed Chaos in the Master Emerald with herself.

In the aftermath of the Knuckles Clan's actions, much of the world was left changed forever; the clan's city lay in ruins, becoming the Mystic Ruins.

In Sonic Chronicles: The Dark Brotherhood, the Knuckles Clan's empire's expanding borders began pushing against those of the Nocturnus Clan empire, a rival echidna clan led by Imperator Ix. In a war of expansion, the Knuckles Clan fought the Nocturnus Clan in a constant bloody conflict for supremacy, where neither side refused to yield.[10] The Knuckles Clan was ultimately pushed to its doom when the Nocturnus Clan began prosecuting the conflict by attacking with their prototype Gizoid.[11] This made Pachacamac believe that the Chaos Emeralds were their only hope and sought to steal them. This plan went awry as he and the other members of the clan were wiped out by Perfect Chaos.[12]

When the Nocturnus Clan soon after disappeared into the Twilight Cage, the remnants of the Knuckles Clan were left to revive echidna society.[12] Its surviving members devoted themselves to protecting the Master Emerald to ensure a tragedy like the one brought by Chaos would never occur again. Over the centuries though, the Knuckles Clan went into terminal decline. In the present day, Knuckles the Echidna is its sole remaining member.[13]

In the Sonic the Comic series published by Fleetway Editions, the Knuckles Clan is referred to as the Echidna Empire. They were an empire that ruled Mobius 8000 years ago, but following their war with the Drakon Empire, all its members had somehow vanished from Mobius, with the exception of Knuckles and Dr. Zachary.

The Knuckles Clan made a small appearance in the Sonic X animated series. In this media, much like in the games, the Knuckles Clan was a clan of warriors under the leadership of Pachacamac that conquered other countries. When Pachacamac and his men then tried to take the Chaos Emeralds, they incurred the wrath of Chaos, who then wiped out the Knuckles Clan in his fury. 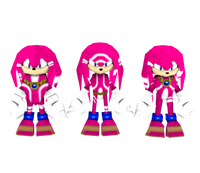