A horde of giant enemies will try to interfere in your race with Knuckles.

First one to the finish wins!

Knuckles: Horde of Enemies is the third Challenge Act of Green Hill Act 1 in the console/PC version of Sonic Generations. It is unlocked after clearing every Stage in the classic era and is playable only as Classic Sonic.

In the late-afternoon time at Green Hill Act 1, Knuckles challenges Classic Sonic to a race to the Goal Plate. During the race, the player must confront giant-sized Badniks (Moto Bugs, Buzz Bombers and Buzzers). However, the player can use these Badniks to their advantage; when Spin Attacking their heads, the player will be bounced into the air as a result. Doing so, however, will temporarily immobilize the Badniks, rendering the player unable to use the aforementioned advantage until they recover.

Parts of the course for this Challenge Act are the same as those in Green Hill Act 1. When crossing the Goal Plate before Knuckles, the player is ranked according to their time.

The player starts the Act with Knuckles behind them. While Knuckles burrows through the ground, the player must scale a few levels of wooden platforms filled with Moto Bugs. After escaping this section and getting through a corkscrew loop, the player must continue forward to find a large, yet harmless Moto Bug on the other side of a small gap. Hit its head to gain a small leap into the air, and the player should eventually encounter a huge Buzz Bomber. Like before, hit its head and proceed forward.

The next section, which is entered after passing through two shuttle loops, is heavily guarded by huge Badniks. At the highest point of this section is a looped bridge that leads to the final area of this Challenge Act. This section consists of wooden platforms that lead to the left and are guarded by huge Badniks. At the end of these platforms, the player must climb to the top of the incoming upward path where the Goal Ring is located. 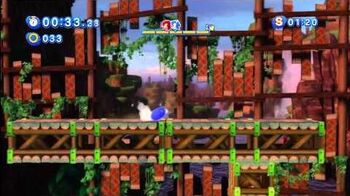