Sonic News Network
Register
Don't have an account?
Sign In
Advertisement
in: Sonic and the Secret Rings, Game characters, Kings, World of the Arabian Nights inhabitants

For the Sonic the Hedgehog (2006) character of the same name, see Solomon.

King Solomon after being reassembled.

King Solomon (ソロモン王, Soromon-ō?) is a character that appears in Sonic and the Secret Rings. He is one of the kings in the world of the Arabian Nights and apparently the one who sealed away creatures like the Ifrit Golem in ancient times.

Long before the events of Sonic and the Secret Rings, King Solomon sealed away many evil spirits. This angered the spirits who decided to join with Erazor Djinn to get revenge.

After Erazor had served his sentence, he sent the Forty Thieves and other spirits to kill Solomon, whom was threat to his plans. Solomon survived, but his body got scattered throughout his castle. When Sonic and Shahra arrived, he had them recover his body and eliminate the Forty Thieves in return for advice on how to defeat Erazor. He was especially intrigued by Sonic, whom he could tell had been cursed. After being restored, Solomon told Sonic and Shahra of how to unlock Erazor's palace. Though Sonic assured he would take care of Erazor as he and Shahra left, Solomon remained concerned as he could sense "death approaching." 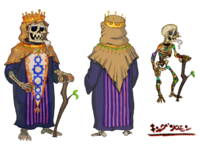