King Puff, from Sonic the Hedgehog #261.

King Puff is a character that appears in the Sonic the Hedgehog comic series and its spin-offs published by Archie Comics. He is a Mobian pufferfish and the ruler of Meropis alongside his wife, Queen Angelica.

Puff is a humanoid pufferfish of short stature, only being just about half the size of his wife. He has indigo skin/scales with thistle spots around his body and a thistle belly and muzzle. He possesses small round fins on his ankles and arms, a medium-long tail fin, no toes, and two small nose holes. He also has thick eyebrows around his eyes and a blue spike each on his chins and jaw. He wears a golden spiky crown and a yellow cape which is held together by a blue treat.

At some point, King Puff and his wife had a daughter named Undina. Over time, Puff and his people had to deal with the threat of Akhlut the Orca and his Northern Oceans Egg Army. Additional problem arose when Meropis' shields had trouble keeping out polluted waters which Puff believed was due to Coral's inability to maintain the shield.[2]

King Puff and his wife received Sonic the Hedgehog and Amy Rose in their audience chamber after the pair and their friend Rotor the Walrus were found at the Eusebes Shrine. King Puff was particularly furious at this, given that he and his wife had not been consulted by Coral the Betta, priestess of the shrine, or her companions before the Freedom Fighters were welcomed into the Shrine. The presence of Dark Gaia Creature, pollution affecting their ocean home, and the constant threat of the Northern Oceans Egg Army had both monarchs puzzled and concerned. Regrettably, they blamed the weakening of Meropis' mystical shield on Coral, and refused to believe Sonic's claims that the planet had been shattered. Upon learning that the sacred Chao Aquarius remained in a cocoon-like state long after she should have awakened, Puff and Angelica stripped Coral of her title. On the subject of another candidate, Puff noted that ahis daughter had studied the rites of the shrine, only to be passed over in favor of Coral. Unfortunately, Coral's feelings of failure at her dismissal made it so that she could not complete the shield rites, causing it to fall and allow the creatures to penetrate the city as they swarmed from the Anostos Rift.[2]

Luckily for the royals, Chaos arrived to aid the Freedom Fighters and Meropis City Guard in fighting off Dark Gaia's forces while Coral was aided in restoring the shield by Tikal. After Aquarius emerged from her cocoon and proved to be fine, the heroes were summoned before the royals once again. Puff and Angelica gratefully restored Coral's status, and apologized to the surface-dwellers for the way they had previously been treated.[3] Later, Puff and several of his subjects would watch the Chaos Emerald Championship on BreezTV, with Puff losing a bet to Razor the Shark.[4]

King Puff is short-tempered, immature, and less dignified than his wife, throwing a tantrum when things do not go according to his wishes. Whenever he gets angry, he tends to inflate himself on instinct. He is also not very open-minded, seeing Sonic's explanation for the misfortunes afflicting Meropis as stupid.[2]

As an aquatic Mobian, King Puff is capable of aquatic respiration, allowing him to breathe both on land and underwater. Like an actual pufferfish, he can also inflate himself into a comically round and spiky ball.[2] 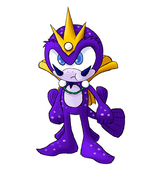 Retrieved from "https://sonic.fandom.com/wiki/King_Puff?oldid=1971357"
Community content is available under CC-BY-SA unless otherwise noted.