King Boom Boo (キングブーブ, Kingubūbu?), also referred to as The King of Ghosts, is a character that appears in the Sonic the Hedgehog series. He is a colossal ghost and the king of ghosts who leads the Boos and Boom Boos.

King Boom Boo is a colossal spirit, being several times the size of the Boos. His overall appearance resembles that of the stereotypical ghost, possessing a white body with a sack-like shape and pointy turf on top of his head. Dominating his face is a large maw with blue lips, sharp white teeth, and a multicolored tongue. His eyes are also multicolored, but small and swollen with black pupils. Also, instead of legs, King Boom Boo has a wispy tail. He also has two arms with three claw-shaped fingers on his hands.

In Sonic Adventure 2, King Boom Boo had taken up residence in Dr. Eggman's pyramid base. While Knuckles the Echidna was searching for keys to the base's center, King Boom Boo attacked the echidna. With Knuckles using sunlight against the ghost though, King Boom Boo was defeated and dispersed into thin air.

In Sonic Rivals 2, King Boom Boo appears as a collectible card. It can be unlocked by winning the Tails Cup in Single Player mode. The card unlocks Tails' Captain suit.

In Sonic Runners, King Boom Boo appears as a S Rare Fly Type buddy which gives the player a thirty percent chances of having their score boosted when defeating enemies.

During the "Halloween" event, King Boom Boo was released by Dr. Eggman and fed some strange candy which brainwashed him into serving as the protector of Eggman's latest theme park project. Though King Boom Boo easily got rid of Team Sonic when they intervened, they returned with E-123 Omega whose searchlight could restore King Boom Boo to normal. While King Boom Boo destroyed Omega's first searchlight, he was restored to normal by a spare. Wanting revenge, King Boom Boo proceeded to chase after Eggman.

In Team Sonic Racing, King Boom Boo appears in the background of Boo's House. He first appears at the beginning of the entrance into the track's desert temple, where he encouraging the player to enter. Later, he is seen flying past some pillars while watching the passing player. He also appears in one of the final rooms near the end of the track. Here, he floats In midair while making an ominous cackle. During the track's last lap, he arrives at the portal leading out of the desert temple and encourages the player to go through it.

King Boom Boo is malicious, sadistic, and mischievous, laughing merrily when causing harm to others. However, he also has a cowardly side, as when the odds would turn against him during his battle with Knuckles, he would resort to running away. He also greatly hates sunlight and will try to hide from it. He appears incapable of coherent speech, only giving off babbles, grunts, and roars.

As a ghost, King Boom Boo has several supernatural powers. He is capable of levitation and can move with enough speed to keep up with Knuckles. He also possesses pyrokinetic abilities that enable him to either form blue fireballs and throw them like projectiles or blow blue flames from his mouth. He can as well transform into a dark shadow of himself which can move across any surface, though he can be removed from said surface by force which will make him revert back to his normal form. He can also seemingly turn himself invisible. He possesses a spirit physiology as well that causes him to evaporate whenever he takes too much damage while tangible.

A boss battle in the Death Chamber, taking four hits to win.

King Boom Boo is encountered as the fourth boss in Sonic Adventure 2 and Sonic Adventure 2: Battle. He is fought by Knuckles the Echidna after clearing through Death Chamber. The fight takes place on a circular platform surrounding a large pillar.

To begin with, King Boom Boo chases Knuckles around the arena. If the player gets too far in front of him, King Boom Boo will turn around and chase from the other direction of the area. King Boom Boo will throw blue fireballs while chasing Knuckles. After a while, he will pause to fire a jet of flame from his mouth, the player should quickly get behind him at this point to see a smaller Boo carrying an Hourglass. Hit the Boo and it will drop the Hourglass, opening up a hatch at the top of the temple. When sunshine pours in, King Boom Boo shrinks down to a shadow and tries to escape along the surface of the platform, including the walls and the ground. Stand on top of his shadow to hold him in place, then Dig into it to chase a weakened King Boom Boo out of the ground. As King Boom Boo then flees around the place, catch up to him and attack by Punching to deal damage. Act fast though, because when the ceiling hatch closes, King Boom Boo will regain his strength. However, if the player can get next to him after a punch, they can hit a second time before the window shuts.

Repeat this strategy, but be careful; after each hit King Boom Boo will become faster and the sand in the Hourglass will run out quicker. Land four hits to defeat King Boom Boo. 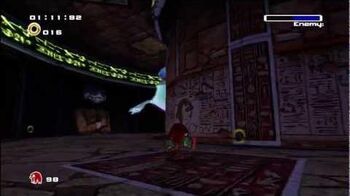 King Boom Boo also made an appearance in the Sonic X anime series and its comic series published by Archie Comics. In this continuity, he and his minion Boos haunt an ancient castle on Earth. He first appeared in "Sonic's Scream Test", where he and his Booms tricked Sonic's allies into releasing King Boom Boo into the living world after kidnapping their friends. However, King Boom Boo was shortly after stopped and returned to his world.

In Sonic X #14, King Boom Boo returned to possess enough people to let him enter the living world, but was convinced by Chris and Cream to return to his eternal sleep.