Sonic News Network
Register
Don't have an account?
Sign In
Advertisement
in: Sonic and the Black Knight bosses, Final bosses

King Arthur appears as a boss fought twice in Sonic and the Black Knight. He is the boss of Misty Lake and Faraway Avalon.

A battle with King Arthur on his horse. Here, the player controls Sonic.

The first battle against King Arthur takes place on a short stretch of terrain, unlike the "circular" battlefields of the Knights of the Round Table.

At the beginning of the battle, King Arthur gallops a short distance on his horse before turning to face the player, who must then swing their sword when Deathcalibur begins to glow. After three swings, the player can jump to damage the king, who gallops away once more. The process repeats, except the second time the player chases the king, he/she is hindered by Knights of the Underworld, and the third time, the player hops on a grind rail rounding a bend while Arthur destroys the path behind him. After three hits, King Arthur is defeated. 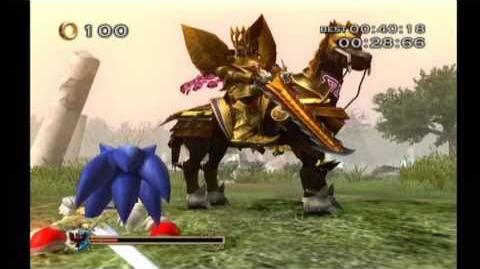 A battle with King Arthur on his horse. Here, the player controls Sonic.

The second battle against King Arthur takes place on an endless strip of road.

When Arthur faces Sonic for the second time (this time on an endless strip of road), he has a wide variety of attacks. These include:

In order to damage King Arthur, the player must use the Soul Surge to overtake him (though using Soul Surge while in mid-air is easier and saves some energy of the Soul Guage). Once the player catches up, he/she jumps onto King Arthur's horse in front of the King and faces him. The player must swing his/her sword with precise timing when Deathcalibur's blade begins to glow. After five swings, the King leaves his chest open for Sonic to use a combo swing or a Soul Surge and damage him. Two rounds of continuous hits are sufficient to defeat King Arthur. 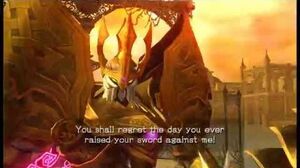