Cyan and white with black sclera

The fastest baddies around, these guys also top the charts for hardest to hit!

The Killer Bee (キラー・ビー, Kirā Bī?) is an enemy that appears in the nighttime Stages in Sonic Unleashed. They are a variant of Dark Gaia's Minions that resemble bees.

Contrary to their name, the Killer Bees look more like wasps or yellow jackets than bees. They have a long thin horn and antennas on their foreheads and possess mouths that resemble a beak with tusks. Their thoraxes are rather spherical and possess small spikes and four wings, and they have purple smoke emitting from their backs. They also have stingers on their abdomens that resemble arrowheads. Finally, they have yellow-green and black skin with cyan markings.

The Killer Bees and the rest of Dark Gaia's Minions came into being when Dark Gaia broke apart at the beginning of Sonic Unleashed due to its premature awakening by Dr. Eggman. These fragments were then spread across the earth and became Dark Gaia's Minions, with the Killer Bees amongst them. They first appear in Apotos Night Act II: Moonsoaked Alleys on the Wii/PlayStation 2 version and in Dragon Road Night Act 1 on the Xbox 360/Playstation 3 version.

In comparison to the rest of Dark Gaia's Minions, the Killer Bees are arguably some of the most dangerous. They have what are easily some of the fastest movements of their kind and can deal a lot of damage. The safest way to beat them is to throw objects at them, as they are highly vulnerable to such damage. Like real insect swarms, the Killer Bees always show up in pairs or groups of themselves. They also have a stronger version of themselves called Red Killer Bees.

In battle, the Killer Bees will circle Sonic to signify they are getting ready to attack. When attacking, they will strike using their large stingers, either by launching themselves into Sonic from behind at incredible speed or dealing a barrage of stings when up close. The Killer Bees also possess wide movement capabilities that let them dodge attacks, by either moving out of the player's range or flying into the air to launch a counterattack, making it quite hard to strike them.

Upon the reconstruction of Dark Gaia by Dr. Eggman, all of the Killer Bees (along with the other types of Dark Gaia's minions) were returned to the beast, who was later defeated and sealed within the planet's core.

The Killer Bees are able to move around by teleporting into an area in a puff of purple. As a Dark Gaia minion, the Killer Bees can possess people by latching onto the deepest, darkest part of the heart, and generate despair, negative emotions or even erratic behavior that are completely opposite to the person's personality.

The Killer Bees are the fastest of Dark Gaia's Minions,[1] presumably only second to the Red Killer Bees. With the wings on their backs, the Killer Bees are capable of flight and can move swiftly through mid-air. They are also quite nimble and acrobatic in mid-flight, being able to avoid incredibly fast attacks with fluid movements.

The Killer Bees also possess barbed stingers that they can use to pierce their opponents.

The Killer Bees make an appearance in the Sonic the Hedgehog comic series and its spin-off comics published by Archie Comics. In this media, they are Dark Gaia Creatures that began emerging from the core of Sonic's world during the Shattered World Crisis. They first appeared in Sonic Universe #63, where a group of Killer Bees and Nightmares ambushed Knuckles in Pumpkin Hill Zone, but they were quickly defeated by Knuckles and the Chaotix. 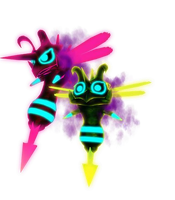