A forward flying kick the user delivers to his obstacles.

When performing the Kick, the user does a somersault and attacks forward along the ground while stretching out both his feet in front of them. When doing so, the user is surrounded by their respective aura (blue for Sonic and yellow for Shadow). When using the Kick, the player can inflict damage to enemies or destroy Wooden Containers.

To perform the Kick in gameplay, the selected team must be in Speed Formation. The player then has to hold down the action button (

) and release it without any teammates nearby to launch the Kick. While performing the Kick, the player can control the direction the playable character is heading with the controls. 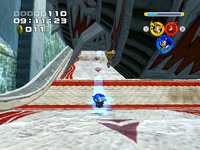