The regular and decayed Kemusi.

Sonic the Hedgehog CD (Only appearance)

The Kemusi[note 1] is an enemy that appears in Sonic the Hedgehog CD. It is a caterpillar-based Badnik model created by Dr. Eggman.

Based on caterpillars, Kemusis appear to be upgraded Caterkiller models. They have a pink body consisting of four round segments, the first of which make up their head while the others have long spikes on top of them and short feet underneath them. Their head segment has a pair of antennas with red and blue details, black eyes and a single mouth with fangs.

Kemusis in Sonic the Hedgehog CD are only found at Quartz Quadrant. In gameplay, the Kemusis squirm slowly along the ground like the Caterkillers, except that they compress and expand themselves rather than undulating. They can only be damaged on their spikeless heads. Hit them anywhere else and the player takes damage.

In the Bad Future or sometimes in the present timeframe of the Quartz Quadrant, the Kemusis show signs of decay, their feet having turned grey and their spikes having fallen off. These variants can as such be attacked anywhere. Like every Badnik in the game, the Kemusis are powered by Little Planet flower seeds which will pop out of them after being defeated. 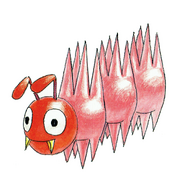 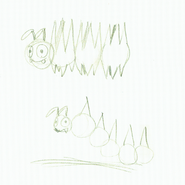