Karen, from Sonic the Hedgehog 2: The Official Movie Pre-Quill.

Sonic the Hedgehog 2: The Official Movie Pre-Quill (only appearance)

Think you can crank out cups o' joe during peak rush for that deal? Because that's the name of the game here--producing.

Karen[1] is a character that appears in the Sonic the Hedgehog film series produced by Paramount Pictures and its spin-offs. She is a human who used to own Karen's Coffee in Green Hills until she had her business taken from her by Agent Stone.[1]

Karen is an adult and slim human woman. She possesses brown skin, black eyes, and shoulder-length black hair with a brown scrunchy at the end and a straight hairline on her forehead. She has also worn a number of attires. Her work uniform consists of a blue shirt and sometimes a black apron with a golden nametag on it, while her casual daywear consists of a simple lavender dress with a light lavender collar and brown shoes. During her time in jail, she would wear an orange prison uniform.

The owner of Karen's Coffee, Karen would seek a barista for her shop, a job of which Agent Stone eventually applied for. Despite receiving an impressive resume from Stone however, Karen was not impressed. Furthermore, Karen told him of the rules in her shop: the pay was absolute minimum wage and there were no benefits. All she cared about were people who could produce coffee. Afterwards, she tried out Stone's specialty—a latte made with steamed goatmilk. However, she spit it back in Stone's face, finding the taste disgusting, before ordering Stone to clean up her own mess.[1]

When Monday came around, Karen's employee Tina had gone AWOL. As such, she decided to put Stone in charge of the cash register, although she warned him not to misplace a single dollar. When her assistant manager then went missing, Karen gave Stone his responsibilities as well on the following Wednesday, telling him not to let the production fall behind. The next day however, while eating at home, Karen got arrested by the authorities for money laundering, which she denied. During the following day, while in jail, Karen got an incoming call that counted as her only call. The caller himself had called Karen to apologize for how her crime was an open-and-shut case due to an anonymous tip and assure her that her coffee shop was in safe hands. As the caller hung up however, Karen realized to her shock that it was Stone.[1]

Despite being in a position of superiority, Karen showcases very little actual skills as a boss, being unencouraging, strict and disrespectful towards both her employees and the applicants that comes to her. Insisting that production is the name of the game in her shop, Karen does not care about how skilled her employees are, as evident by how she crumbled up Agent Stone's impressive resume without looking at it; all that matters is that her workers can produce enough coffee during rush hour. She is also an overall nasty person, having spit the latte Stone made in his face because she did not like it and then ordered him to clean up her own mess. Furthermore, she is quite demanding and completely uncompromising; she lives in her own personal version of the world, and she expects everyone to live and work in accordance to how she wants it. Furthermore, she has no problems about putting additional workload on her employees if the others do not show up.[1]

Despite being a crummy boss, Karen does have some business skills, being able to run her own coffee shop.[1]

Karen did not like Agent Stone from the very beginning. Notably, she considered him too ambitious, which prompted her to label him "Big Shot." Even after hiring him, she would further insult and humiliate Stone at every step while burdening him with newer and bigger responsibilities. However, she apparently underestimated him very much; after being arrested and losing her shop, Karen would show disbelief when Stone revealed himself as the mastermind behind her downfall.[1] 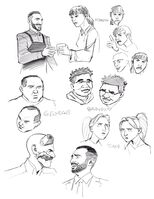