Jump Parade is a racetrack that appears in Sonic & Sega All-Stars Racing. It is one of three tracks in the game that are based off Carnival Town, as well as the third course of the Egg Cup.

This is a relatively frill-free course that provides plenty of opportunities to drift and boost without much environmental interaction.

About halfway through the course, racers cruise along the rooftops, where floating star balloons can be seen up ahead. Crashing into these will slow the player down, so it is best to steer between them. There are three stars in a formation; typically, the outer two will descend as the center one rises, and vice-versa. The player has time to track their movement during his/her approach, which allows him/her to either dodge out of the way or boost through them. The balloons can also be popped with weapons, or rival racers can clear that part of the course just ahead.

With the exception drifting along the streets near the start of the course and later dodging balloons, much of the course is spent on gradually turning scaffolding. This affords the perfect opportunity for some long drifts. Another attraction is the rising ramp near the end of the stage. Racers can head up the center for a relatively safe approach, or dodge to the sides to gain some speed by following the purple boost pads.

For Carnival Town/Carnival Island-located tracks, such as Jump Parade, these are the following tracks selectable for the course: 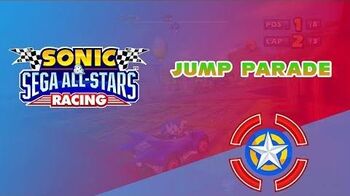