Not to be confused with Fireball Jump.

Vector the Crocodile (with Espio the Chameleon and Charmy Bee)

An attack where Vector spits out his teammates as fireballs from the air.

Jump Fireball[1] is a Power Formation maneuver used by Team Chaotix in Sonic Heroes. When using this technique, Vector the Crocodile fires his teammates Espio the Chameleon and Charmy Bee as projectiles from the air.

When using Jump Fireball, Vector, having entered Fire Combination beforehand and thus holding Espio and Charmy as spinning balls in his jaws, jumps into the air. He then bends his head back before spiting out one of his teammates diagonally towards the ground with such force that the teammate turns into a fireball and creates an explosion upon impact that damage everything in the vicinity. This allows the player to damage enemies, break open doors and destroy obstacles from above.

To perform this technique in gameplay, the player must have Team Chaotix in Power Formation with Vector as the leader. The player then has to enter Fire Combination and jump into the air, where the player has to press the action button (

) to fire the teammates. When used near targets, the thrown teammates will automatically home in on them. Additionally, the Jump Fireball can be used up to two times in a row, depending on the number of teammates Vector carries. 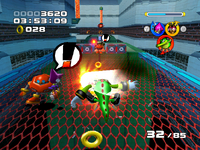