Julie-Su of the House of Dimitri

Julie-Su is the Light Mobius counterpart of Mobius Prime's Julie-Su.

Julie-Su had developed a much gentler and more maternal personality, showing great support and compassion for her domestic partner, Knuckles, and her daughter, Lara-Su. She took her role of parenting very seriously, and often had to remind Knuckles on parenting tactics to deal with their rebellious daughter. Because of her help, Knuckles was able to convince Lara-Su to attend her Unveiling ceremony. Following this she had a mother-to-daughter discussion about why she was so over protective.

Julie-Su later made all the preparations, with help from Abby, for King Sonic and Queen Sally's visit to their home. She, Sally and Lien-Da discussed at length how difficult it was to satisfy everyone's appetite and to convince Sonic and Knuckles to attend social gatherings. She later spent time talking to Queen Sally while their husbands and children played in the pool.

Julie-Su later wished her husband luck before he went off with King Sonic on their mission to save their universe.

In the altered timeline, Julie was still a worried mother over her daughter's safety, and Knuckles commented that she would probably flip when she found out that Lara-Su took on the former king, Shadow, and won.

Five years afterward, Julie-Su and Knuckles leave Lara-Su in charge of things while they are away. When Julie asked if she was sure she could handle it, Lara reassured them both by saying that she is "ready for anything".

In the Unaltered Timeline, aside from a few scenes where she was seen wearing a bathing suit at pool side, Julie-Su had developed a slightly more feminine look, although still with a tomboyish touch. She was seen wearing a blue colored sleeveless top, and gray shorts and boots, with the legs on the bottoms stopping just above her knees. Her hair was much longer and more femininely styled, and her dreadlocks were much longer, as well, with fewer cybernetic attachments.

In the Altered Timeline, Julie-Su look hasn't truly changed, though her hair is now shorter. 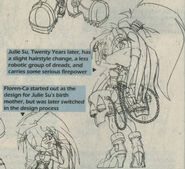