Not to be confused with the robot named Johnny in Sonic Rush Adventure. For the rabbit character from early games of the series, see Pocky.

Johnny Lightfoot from Sonic the Comic #21. Art by Richard Elson.

Johnny Lightfoot is a character that appears in the Sonic the Comic series published by Fleetway Editions. He is one of the founding members of the Freedom Fighters. He was a constant presence in the strip from its earliest issues to his death in the final arc.

The character of Johnny Lightfoot is based on the standard rabbit creature that could often be seen hopping away from a defeated Badnik in early games from the series.

Johnny resembled a gray rabbit with blue eyes. Though initially portrayed as a diminutive rabbit, he adapted to a taller and more humanoid form Sonic the Comic #21 and onward. While a member of the Freedom Fighters he wore blue jeans, white shirt and a red jacket.

In Johnny's earliest (confirmed) appearance, he was one of two characters (with Porker Lewis) that accompanied Sonic and Tails into the Special Zone to learn about the origins of Sonic and Doctor Robotnik.[2] However, these four were tricked by Robotnik and transported forward in time by six months to find that Robotnik had conquered Mobius in their absence.[3]

Johnny became a founding member of the Freedom Fighters, and started to wear a red jacket, which served as his uniform while a member of the team. He also fought with a unique-looking staff-like weapon. He joined Sonic on yet another mission to the Special Zone, this time to rescue Amy Rose from the Egg Fortress,[4] and later argued that Amy should join the Freedom Fighters as she was not safe back in the Emerald Hill Zone.[5]

Unlike the other Freedom Fighters, Johnny never had much in the way of his solo adventures or major story lines. Once, while investigating reports of slave labour in the Cotton Factory Zone, he even expressed a desire to have his own solo adventure. Immediately after this comment, he was attacked by the Badnik army of Commander Brutus.[6] Johnny noticed that the Badniks had exceedingly poor aim, and managed to trick them into destroying the local wool factory, freeing the sheep workers. However, he was captured when Brutus himself caught Johnny by surprise, and the Trooper used a mind scanner to absorb a copy of Johnny's brainwaves. Brutus learned all of Johnny's secrets (including the location of the Emerald Hill Folk in the Mushroom Hill Zone),[7] but Johnny's personality soon began to take hold, turning Brutus good! Under the influence of Johnny's mind, Brutus destroyed all of his Trooper followers before managing to erase the copy of Johnny's brainwaves (along with all of Johnny's secrets). In the confusion, Johnny himself escaped unnoticed.[8] He would later be briefly turned into a Badnik Johnny by Brutus, only to be saved by Shortfuse the Cybernik.[9]

A storyline in later issues introduced a villain called Agent X, one of Robotnik's minions. After several appearances, Agent X sabotaged the Freedom Fighter's attack on Robotnik's old Flickies' Island base and, after capturing them, revealed himself to be Johnny. It soon turned out that it was not the real Johnny at all, as due to a rip in time and space, he had been captured and replaced by shadow-like aliens. Sonic saved Johnny from the shadow's home dimension and Agent X was destroyed.

The character of Johnny Lightfoot was killed in the final story arc of STC based on Sonic Adventure when he attempted to reconnect power to an object the characters needed to defeat the rampaging Chaos. As he reconnected the power, Chaos attacked him and killed him with a powerful blow.

Sonic was deeply affected by Johnny's death and left the Freedom Fighters for a time to cope. During this period, Sonic matured significantly and lost many of his old personality flaws. Upon his return, Sonic traveled back in time, hoping to destroy Chaos in the past so he could not kill Johnny in the present, only to end up nearly killing himself.

When Doctor Robotnik became all-powerful by absorbing the power of the Chaos Emeralds, he rewrote history so that Sonic the Hedgehog had never existed. In this alternate reality, Johnny never became a Freedom Fighter. In this alternate timeline, he and Amy Rose live in the Emerald Hill Zone, which is now an industrial Zone used to process radioactive waste for toxic chemical dumping. Johnny was the more cautious of the two, constantly worrying about being caught by one of Robotnik's traps, or by Troopers, or by Oscar the Pig and his Death Squad.[10]

Johnny was one of the most loyal and reliable of the Freedom Fighters, often being a more sensible counterpoint to Sonic.

Johnny fought with a unique-looking staff-like weapon which was his signature equipment. 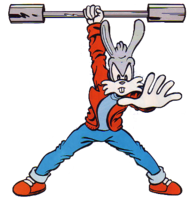 Art by Carl Flint.
Add a photo to this gallery

Retrieved from "https://sonic.fandom.com/wiki/Johnny_Lightfoot_(Sonic_the_Comic)?oldid=2381659"
Community content is available under CC-BY-SA unless otherwise noted.