For the character in the Sonic the Comic, see Johnny Lightfoot. For the singer in Crush 40, see Johnny Gioeli.

I am the sultan of speed! The unparalleled and unequaled Johnny! No one can keep up with me! No one!

Johnny (ジョニー, Jonī?) is an antagonist that appears in the Sonic the Hedgehog series. He is a villainous robot pirate who serves as the right-hand man of Captain Whisker and a feisty and speedy competitor on the sea. He was created by Dr. Eggman and Eggman Nega for the purpose of finding and obtaining the Jeweled Scepter.

Johnny was at some point created by Dr. Eggman and Eggman Nega. After being put under the command of Captain Whisker, Johnny, along with Whisker and his crew, was assigned by the doctors to find the Jeweled Scepter.

While searching for the Jeweled Scepter in Blaze's world, Johnny and his crew caused havoc on the seas. Meanwhile, Johnny heard rumors saying Sonic the Hedgehog had appeared in this dimension.

Eventually, Johnny came across Sonic, Tails, and Marine on the Ocean Tornado and challenged Sonic to a waterbike race. However, as Marine kept pestering and taunting him to race her first, Johnny accepted Marine's challenge. To Johnny's bewilderment, Marine had Sonic compete in her stead. After the race, Johnny laid in wait across the sea, awaiting his next meeting with Sonic.

When Sonic, Tails and Blaze confronted Captain Whisker on Pirates' Island, Johnny hurried there as fast as he could. When he arrived at Whisker's side, Johnny saw that Sonic was there too and challenged him to a final showdown. He then teamed up with Whisker against Sonic and Blaze, but were both defeated. Fearing that being defeated here would devastate all speed lovers across the world, Johnny escaped and left Whisker behind. Following the end of Sonic Rush Adventure, Johnny remains at large somewhere in Blaze's world.[1]

Johnny is a feisty speed demon who refuses to finish second. He is highly arrogant, boastful, and supremely confident in his own speed and abilities, being convinced that he is the fastest of all, even viewing Sonic as unworthy of being "the fastest thing alive." His ego goes so far that he believes that him losing would devastate all speed lovers across the world. However, his incredible speed seems to lend to a cowardly streak, as he will turn tail and run when things go against him in battle.

Johnny usually takes very limited interest in others, considering them not worth his time, and would rather push them away and focus on the people he desires. However, he does not tolerate peoples' insults, regardless of how they are, and will gladly turn his attention to them to prove them wrong.

Johnny possesses a degree of super speed, enough to let him cross incredible distances in the blink of an eye. However, he lacks the reflexes to match his speed, since he has trouble turning at super speed. He also possesses a jet engine on his back that allows him to fly through midair and reach high speeds as well.

Johnny has impressive durability, able to withstand several Spin Attack-based attacks from Sonic or fire-based attacks from Blaze. Johnny is also a well-versed waterbike rider, skilled enough to keep with even Sonic on the Wave Cyclone. He is able to expertly ride his own waterbike at incredible speeds and perform airborne tricks with it.

Johnny has a bitter rivalry with Sonic the Hedgehog which was forged immediately after meeting him. While he admits Sonic is fast, he is convinced that Sonic is not as fast as himself. Regardless, Johnny views Sonic as his arch-rival whom he must outperform on his waterbike.[2]

It is revealed late in the game that Johnny serves under the command of Captain Whisker. While Johnny does acknowledge Whisker as his boss, he does not exactly like to be held back by him. He is also not completely loyal to him as he prioritized his own reputation over Whisker and abandoned him when Sonic and Blaze were winning.

Johnny first appeared in the Archie Comics as a part of the Sonic the Hedgehog comic book series' adaption of Sonic Rush Adventure.

In the comics, Johnny is a minion of Captain Whisker, who serves under Eggman Nega. Johnny, Whisker, and the rest of their crew were assigned by Nega to collect a Chaos Emerald on Seagull Island. On the island, Johnny stole the Chaos Emerald from Sonic, Tails, and Marine, and managed to escape. Eventually though, Johnny, Whisker, and Eggman Nega were tracked down by Sonic, Blaze, Tails, and Marine, and were subsequently defeated.

After the Super Genesis Wave, though slightly unaffected, Johnny's past became nearly identical to his game counterpart. Sometime later, Johnny stole a Sol Emerald from Captain Metal and brought it to Whisker, but was forced into retreat after a battle with Blaze and her allies, and Captain Metal and his crew.

"You may be fast, but you're not as fast as me! Let's see what you've got!"
—Johnny challenging Sonic to a race.

"I'm not going to sit here and listen to this! Not even from a kid!"
—Johnny having had enough with Marine's taunts.

"So, a little tag team action, is it? You guys are toast!"
—Johnny teaming up Whisker against Sonic and Blaze.

"If I go down here, then all the speed lovers all over the world will be devastated!"
—Johnny on the verge of defeat against Sonic and Blaze. 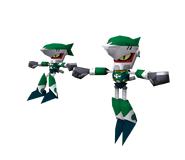