Jian the Tiger, from Sonic the Hedgehog #281.

Jian the Tiger is a character that appears in the Sonic the Hedgehog comic series and its spin-offs published by Archie Comics. She is a member of the Shijin Warriors who defected from the Egg Clan Army and now fights to oppose them.[2]

Jian is a white anthropomorphomic tiger. She has black stripes in her arms, back,muzzle and tail. She also has two eyebrow like markings. She has black ears, that droop somewhat. She has jade green eyes and two pigtails that are black in the middle held together by green scrunchies.

For attire she wears a red cube top, a red badana, red, black and green gloves, black tracksuit pants and red shoes. The edge of her tail is cybernetic and processes a blade.

Early on in her life, Jain joined the Egg Clan Army. Enticed with their pride of strength and unity, she soon realized their cause was not one she wanted to be a part of and left.[1] She would later answer Dulcy the Dragon's call to arms and joined the Shijin Warriors, a Freedom Fighter group.[2]

During the Shattered World Crisis, Jian and her teammates were visited by and introduced to the Freedom Fighters, old friends of Dulcy's, who were in search of Gaia Key Guardian Zonshen.[2] The two parties were able to mount an ambush against the Egg Clan Army while Sonic kept the corrupted Gaia Phoenix preoccupied. Jian and the others succeeded in their respective tasks, allowing the Freedom Fighters access to Zonshen's Gaia Key.[3]

Later, Jian and her teammates were contacted by Sonic the Hedgehog and Sally Acorn, both of whom discussed a plan that involved a worldwide assault against the Eggman Empire. Jian and the others agreed to this plan,[4] and later oversaw the restoration of the planet.[5]

Jian appears to be the most serious of her team and to have a sense of respect. She also appears to like unity through strength, and hard work and claims that this is what drew her to Egg Clan Army initially.

Jian is a capable fighter in combat and has a hidden blade built into her cyberized tail that she can produce from her tail tip and use to cut down her foes.[1] She is also able to perform the Spin Dash as well.[3] 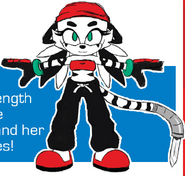 Retrieved from "https://sonic.fandom.com/wiki/Jian_the_Tiger?oldid=2170518"
Community content is available under CC-BY-SA unless otherwise noted.