Lonely before you even leave?

That, and nervous. I wouldn't have you to watch my back.

— Jewel and Tangle the Lemur, Sonic the Hedgehog: Tangle & Whisper #1

Jewel the Beetle[4][6] is a character that appears in the Sonic the Hedgehog comic series and its spin-offs published by IDW Publishing. She is an anthropomorphic beetle and the curator of the Mineral Museum. She is also Tangle the Lemur's best friend and the current director of the Restoration.

Jewel was conceptualized by Ian Flynn, while her design was handled by Jennifer Hernandez.[1]

Jewel is an anthropomorphic beetle with primarily light blue skin, pink eyes, a small black nose and a white muzzle. She has an even lighter blue iridescent exoskeleton with a pink, yellow, green, and blue rainbow-like sheen. Her antennae are light blue. The interior of her wings are cream.

For attire, she wears a deep pink blazer with navy buttons, a white cravat attached to a golden brooch with a blue gem, a matching deep pink miniskirt, white gloves with navy cufflinks, navy tights, and deep pink wedge pumps.

Jewel has been a resident of Spiral Hill Village for years. She grew up with Tangle the Lemur, who became her best friend. Jewel would constantly look out for Tangle, as she had a tendency to run into danger head first. Over the years, Tangle would find several items during her adventures, which Jewel used to curate the Mineral Museum.[7]

One day, as Jewel was working in her museum, Tangle barged in, startling her. Tangle introduced Jewel to her new friend, Whisper the Wolf. Jewel introduced herself and the museum, explaining how Tangle helped collect items for her to curate the museum. Soon though, the sky ominously turned dark. Whisper immediately after pulled out her Variable Wispon as she had heard a scream come from outside. A moment afterward, the Babylon Rogues broke in Jewel's museum and began stealing her exhibitions. Too scared to do anything, Jewel covered in a corner, only to be mistaken for a gemstone by Storm the Albatross, who put Jewel in his bag and took her up to the Babylon Rogues' blimp. After Storm unveiled Jewel to Jet and Wave however, Tangle and Whisper arrived to save Jewel. After a heated discussion with Wave about how they should handle this hostage situation, Jet got tired and told Storm to throw everyone out. Storm proceeded to throw Jewel out of the blimp. On the way, Jewel slightly cracked her wing against the hangar, preventing her from flying freely. Fortunately, Tangle and Whisper came to her rescue, with both Tangle and Whisper managing to hang onto her and Whisper using her Variable Wispon to gently lower them down. Jewel's wings soon got patched up. With Tangle having reclaimed the stolen minerals as well, Jewel and her friends began restoring the Mineral Museum. Meanwhile, Jewel thanked both Tangle and Whisper for saving her life and her livelihood.[7]

Jewel later found Tangle recklessly swinging around in the streets of Spiral Hill Village. She asked for Tangle to stop before she ran into someone but Tangle dismissed her concerns. However, Jewel was right, as Tangle soon crashed into Ron's chili dog cart. The duo then ordered chili dogs and went to Jewel's museum. There, Jewel mocked Tangle for running into a stationary object and asked why she had been so restless lately. Tangle told her that the reason for that was because after fighting against robot invasions and meeting Sonic the Hedgehog and his friends, she no longer wanted to return to her boring life. Jewel asked her what was stopping her from finding adventures on her own, to which Tangle replied that she did not wish to have Dr. Eggman's Badniks attack the town again. She also stated that she would feel lonely without Jewel by her side. Soon though, the duo heard a crash from outside. Jewel immediately cowered behind her desk, worrying that the Babylon Rogues had returned. Tangle, however, told Jewel to hide while she checked the situation out.[8]

When Jewel looked outside, she saw what appeared to be Sonic running away from Whisper. Later, Tangle, Whisper and Whisper's Wisps came to the museum where Whisper explained over some tea Jewel offered them that the Sonic that Jewel saw was a mercenary shapeshifter named Mimic whom Whisper had been tracking. Whisper also told the two that Mimic aided Dr. Eggman in destroying his own team a while back and had now resurfaced to impersonate Sonic and wreak havoc. In addition, Mimic was targeting not only Whisper but Tangle as well. Seeing this as an opportunity for Tangle to find adventure, Jewel told Tangle to join Whisper in her quest to stop Mimic. After Whisper was convinced to let Tangle come along, the trio heard a "thunk" at the door. Finding a message from Mimic struck to the door with a dagger that told Whisper that they should end this once and for all, Jewel was upset about the damage done to her door.[8]

The Catalyst and The Last Minute

Some time after Tangle and Whisper's encounter with Mimic, Jewel learned from Tangle about the Metal Virus, a substance created by Dr. Eggman that turned those infected with it into Zombots. One day, Jewel was in village square when the president of the Sonic Fan Club approached and asked if she had seen Tangle, as he was hoping the latter could help him find his missing friends. Jewel told him Tangle was absent, but she offered to help him, saying she was sort of a hero herself after the number of times she had gotten Tangle out of trouble. The two went to Spiral Hill farms where the rest of the club members were last seen and soon found the club's vice president stranded on a haystack surrounded by a metallic liquid. Jewel, recognizing it as the Metal Virus' base form, warned the children not to touch it. Unaware that the vice president had already touched it and the president curiously touched the liquid anyway, Jewel helped the young wolf up.

The trio then saw Eggman's Faceship appear over the farm again and dump more of the Metal Virus. Jewel grabbed the children and fled back to town, seeing more of the club members along the way; however, they did not call their attention as they had all turned into Zombots. When they arrived back at the village, Jewel discovered that the children were infected and, having touched them, so was she. To make matters worse, the Faceship arrived over Spiral Hill Village at that moment and began dumping the Metal Virus into it. Jewel desperately contacted Tangle and the Restoration for help, but she became a Zombot before they could arrive. Jewel had returned to the Mineral Museum by then and lurking on a podium when Tangle came to check on her later. She ambushed Tangle and struck her in the shoulder, infecting her, although the lemur enclosed the Zombot beetle in a glass case before she could do more harm.[9][10][11]

After the Deadly Six had taken over Eggman's plans, Zavok used his powers to lead a large horde of Zombots to Angel Island, which included Jewel. After Super Sonic and Super Silver had reversed the effects of the Metal Virus all around the world, the Zombots were no more and were cured.[12][13][14]

Out of the Blue

Some time later, after being told by Tangle of Amy Rose's current lack of satisfaction with her role in the Restoration, Jewel visited the hedgehog at Restoration HQ. She offered to take over her position in administration of the Restoration as she liked cataloging and organizing and felt excited at the thought of bringing it to order. Amy was taken happily taken aback by this, but thanked Jewel and accepted her offer. She then made sure to bring the beetle up to speed before stepping down. Later on, Jewel joined Tangle's party in Spiral Hill Village. Though she enjoyed her time for a while, the party was soon crashed by Eggman arriving in a large mecha with the intent of destroying everyone.[15] Cowering in fear, Jewel did not know what to do when Whisper asked her for a plan as she was only concerned with organizing the Restoration, thus prompting Vector to take over. After Eggman was defeated, the mecha destroyed and Sonic having returned from his absence, Jewel informed Tangle that the fire in Spiral Hill Village created by Eggman's attack would need to be extinguished.[16]

With Amy's help, Jewel and the Restoration got a brand new and more efficient HQ set up. After a while, Jewel and Amy welcomed Sonic, Tails and Belle to the Restoration's new HQ when the trio arrived to instate Belle into the Restoration. Jewel subsequently sent Belle to the machine shop. After giving Sonic and Tails a grand tour of the new HQ though, Jewel received a report on a weather-controlling tower along the coast that was made by Eggman. Since Jewel and the Restoration did not have the resources to deal this threat, Sonic, Tails and Amy volunteered to go investigate it. Tangle wanted to join them as well, but Jewel reminded her that she had inventory duties.[2]

Jewel eventually summoned the Chaotix to the new Restoration HQ to help them solve the problem with some horned monsters who had been attacking the last few cities. The Chaotix subsequently determined that the Deadly Six were responsible for the attacks, and that their next target would be Sunset City.[17]

Jewel is a well-mannered person with a bright sense of humor and a passion for minerals. Whereas Tangle is reckless and loud, Jewel is more reserved and cautious. Jewel is also quite fearful and dislikes violence very much.

Jewel has the ability to fly with her wings, as long as her elytra are intact.[7]

Jewel and Tangle have been best friends since their childhood. Jewel would always be there to look out for Tangle and make sure she did not fall into perilous danger. Though Jewel can get weary of Tangle's recklessness, she still cares for her.[7]

Jewel met Amy Rose after being told by Tangle of Amy's current lack of satisfaction with her role in the Restoration. As such, Jewel visited Amy and offered to take over her position as director of the Restoration and felt excited at the thought of bringing it to order. Amy was taken happily taken aback by this, but nonetheless thanked Jewel and accepted her offer. She then made sure to help Jewel get a brand new and more efficient HQ set up. After their first meeting, Amy started to care for Jewel since she makes sure that she is okay, and the two became close.[15][2] 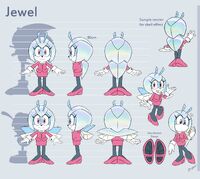 International Women's Day 2021. Art by Evan Stanley.
Add a photo to this gallery