For other uses, see Jawz (disambiguation).

A Jawz, from the Wii version of Sonic Colors.

It zooms across the sky and is so happy to see you.

The Jawz[1] (ジョーズ[2], Jōzu?), also known as the Jawzun (ジョーズン, Jōzun?)[3][4] in Japan, is an enemy that appears in the Sonic the Hedgehog series. It is a mass-produced, shark-based Badnik model created by Dr. Eggman which can travel through the air and underwater.

In gameplay, Jaws are either flying or swimming in a straight line without turning around, but make no effort to attack the player. If the player gets damaged by a Jawz however, it will self-destruct without releasing the animal inside of it. Nevertheless, they can still be dangerous if the player fails to notice them. Otherwise, they are easily defeated with the Spin Jump.

In the Wii version and Nintendo DS version of Sonic Colors, and the remake Sonic Colors: Ultimate, Jawz are encountered in Aquarium Park. In the Wii version and Sonic Colors: Ultimate, they are larger and swim around in the underwater sections, and will charge towards Sonic in a straight line once he gets too close. Smaller variations of the Jawz are also featured, which follow Sonic around underwater rather than in a straight line. Otherwise, the Spin Jump and the Yellow Drill can defeat them.

In the Nintendo DS version, only the blue variation of the Jawz appear. These Badniks usually swim around, but will start charging towards Sonic once he gets close. While they charge, the player cannot attack the Jawz without taking damage. Instead, the player has to attack them using the Yellow Drill.

Jawz can both fly and swim using a turbine engine. They also have a self-destruct function that activates after someone touches them.

In the Sonic the Comic comic series and its spin-offs published by Fleetway Editions, the Jawz is a mass-produced Badnik made by Dr. Ivo Robotnik. It served as one of the doctor's first generations of Badniks that he used to terrorize Mobius with.

In the Sonic Adventures comic book, the Jawz is a Badnik model in Dr. Robotnik's army. Once, the doctor sent numerous Badniks, including the Jawz, on a huge chase after SOnic and Tails when they escaped from his spaceship.

In the Sonic the Hedgehog comic series and its spin-offs published by IDW Publishing, the Jawz is a Badnik model created by Dr. Eggman. Their past is virtually identical to their game counterparts', up until after the events of Sonic Forces. 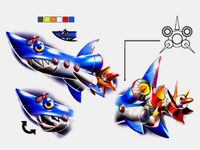 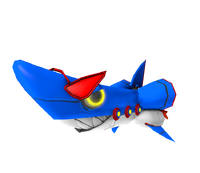