For other uses of the term, see Jaws (disambiguation). You may also be looking for Jawz.

A Jaws, from the Wii U version of Sonic Lost World.

Specializing in underwater patrols, this lethal fish is on the lookout to put an end to Sonic's aquatic adventure.

Jaws[2] (プクプク[3], Puku-Puku?) is an enemy that appears in the Sonic the Hedgehog series. It is a mass-produced, submersible shark-based Badnik model created by Dr. Eggman which specializes in underwater patrolling.

Jaws are based on real-life sharks. They have a pink shark body with a gray propeller for a tail fin which is used for propulsion. Other features include a small gray pelvic fins and a small dorsal fin. They also have a large mouth with sharp teeth and a yellow jaw connected at each joint by gray screws. They also have two short eyestalks with big eyes and yellow eyelids.

In Sonic the Hedgehog 4: Episode I, Jaws are more detailed and have two small nostril holes on their nose. In Sonic Lost World, Jaws returned to their original design, but with cyan eyes.

The first appearance of this Badnik was in Sonic the Hedgehog (16-bit), where it served as an enemy. This time around, this Badnik is referred to as Jaws[2] (プクプク[3], Puku-Puku?). In this game, the player encounters them in the underwater sections of Labyrinth Zone and Scrap Brain Zone Act 3.

Since Jaws can only swim back and forth without deploying any direct means of offense in gameplay, they can easily be destroyed with the Spin Jump or a Spin Attack aimed from above. Also, upon their defeat, they release an Animal and grant the player 100 points.

In Sonic the Hedgehog (8-bit), Jaws return as enemies and can be found in the underwater sections of Labyrinth Zone. In this game, Jaws act like in their 16-bit counterparts; they swim back and forth without attacking, and can be destroyed with either a Spin Attack or Spin Jump. They are also smaller than Sonic himself and have a gray color scheme underwater. As the others Badniks in the game, Jaws do not have Animals inside of them. However, they do grant the player 100 points when destroyed.

In Sonic the Hedgehog 4: Episode I, Jaws received an upgraded design. In this game, they can only be found in Lost Labyrinth Zone Act 3, which is the most water-related Act in the Zone. Despite their new design, Jaws acts like they did in the original Sonic the Hedgehog.

In the Wii U version, PC version and Nintendo 3DS version of Sonic Lost World, the Jaws appear as enemies, with a design more reminiscent of their original appearance. During the games' events, the Jaws and Dr. Eggman's other Badniks got hijacked by the Deadly Six.

In the Nintendo 3DS version, the Jaws are found in the underwater pools of Tropical Coast Zone 1 and 2, either swimming about in groups or deployed by Blowfish Transporters. If they spot Sonic, they will chase after him and try to bite him, although player can defeat them with a Spin Jump or Focused Homing Attack before that happens. Additionally, Jaws will be destroyed if they hit a surface after being deployed by a Blowfish Transporter.

When a Jaws is destroyed by the player in any of the versions of Sonic Lost World, it will release an Animal.

Specializing in underwater patrols, Jaws are excellent swimmers with their fin propellers. Possessing sharp teeth, the Jaws can use lethal bites.

Jaws appear briefly in Sonic the Hedgehog Story Comic manga. In Sonic the Hedgehog Story Comic Volume 3' story Sonic Rampage!!, as Sonic enters to the Labyrinth Zone which was located under the Clockwork Zone, he gets involved in a waterfall deep under the water. He there faces two Jaws who are ready to finish him off. Luckily Sonic manages to escape from the Badniks in the ground, knowing that he can not perform the Spin Attack underwater.

In the Adventures of Sonic the Hedgehog television series, the Jaws are a model of Badniks created and used by Dr. Robotnik. They first appeared as guards investing the waters of the undersea city of Labyrinth, but failed to keep out Sonic, Tails and Surff. A submarine-based Jaws was also used by Scratch and Grounder to ambush Sonic and Tails when they were out at sea.

In the Sonic the Hedgehog comic series and its spin-offs published by Archie Comics, the Jaws was one of the Classic Badniks created by Dr. Ivo Robotnik. In the comics' early run, the Jaws served as Robotnik's foremost subordinate in his underwater operations. However, he was eventually rendered obsolete by more advanced robots and got decommissioned.

In the Sonic X comic series published by Archie Comics, a Jaws appeared in a virtual reality version of the Labyrinth Zone, trying to attack on Rouge the Bat, but got destroyed as Knuckles activated an underwater wall hatch.

In the Sonic the Hedgehog comic series and its spin-offs published by IDW Publishing, the Jaws are Badniks from another dimension set in the recent past, where they were created by Dr. Eggman. 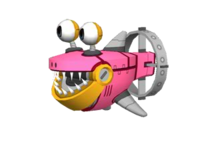