Jari-Pekka, from the Xbox 360/PlayStation 3 version of Sonic Unleashed.

Head of the Holoska clan. He has an absolutely terrible memory: first he'll forget something; then he'll forget what he forgot and get upset; give him another minute, and he'll have already forgotten what was troubling him. Keep this to yourself, but the day he got chewed out by his wife Ursule for forgetting where they had their first date. Did she clip his whiskers good!

Jari-Pekka (ヤリ-ペッカ, Yari-Pekka?) is a character that appears in Sonic Unleashed. He is a human resident of Holoska and the head of the Holoska clan, the husband of Ursule, and the father of Jari-Thure.

At least fifty years prior to Sonic Unleashed, Jari-Pekka was out on the ice floes in Cool Edge in the evening with Ursule. There, Jari-Pekka took Ursule by the hand and proposed to her while promising that he would store away some dried meat on their wedding day, which they would could eat their 50th wedding anniversary. Afterwards, Jari-Pekka married Ursule and, as promised, he stored away some dried jerky in Cool Edge. Later on, he and Ursule had a son named Jari-Thure. At some point during his marriage, Jari-Pekka told Ursule that he had forgotten where they had their first date, which let to him being heavily scolded by his wife.

During the events of Sonic Unleashed, Jari-Pekka became possessed by Dark Gaia's Minions, which gave him an improved memory and a sharper mind at nighttime due to their personality-reversing effects, though he would also act like a goofball.

At some point after his possession, Jari-Pekka met Sonic the Hedgehog and Chip when they first arrived in Holoska. where he claimed to know Sonic, but then quickly forgot what he was saying and asked Sonic who he was. Later, after nightfall, Jari-Pekka met up with Sonic the Werehog and Chip again. However, due to the influence of Dark Gaia's Minions, Jari-Pekka told Sonic and Chip that he was pleased to meet them and about how his mind had been better during nightfall lately.

Jari-Pekka continued to have this behavior for some time, shifting between his moods between day and night. Whenever he met Sonic and Chip during the day in this period, Jari-Pekka would try to remember Sonic's name, only for then to have Sonic tell him, where he would remark that it was a fast-sounding name, but would then quickly forget it. Whenever he met Sonic and Chip during the night in this period, however, Jari-Pekka would rebuke Sonic's claims that he was forgetful and claim that he was physically and mentally fit. Eventually, Jari-Pekka was freed from Dark Gaia's Minions when Sonic the Werehog and Chip exorcised him. As he recovered, Jari-Pekka told Sonic and Chip how he felt his body refreshed and his mind sharp, but then forgot what they were talking about.

Sometime after his exorcism, Jari-Pekka met Sonic and Chip once more, where he tried to remember Sonic's name before eventually saying that it was "James", but was disappointed to hear that he was wrong. Brushing his flawed claim off, Jari-Pekka wanted to hear which region of earth that Sonic and Chip had restored recently. Hearing it was Chun-nan, Jari-Pekka praised Sonic for the effort, though he ended up calling Sonic "James" again.

At some point afterwards, Jari-Pekka realized that his 50th anniversary with Ursule was coming up. He also remembered promising Ursule to do a special thing on this anniversary, but he could not remember it. Some time later, Jari-Pekka met Sonic and Chip again, where he had Sonic hear his problem about his promise to Ursule. After that, Jari-Pekka thought that he could jog his memory if he went to the place where he proposed to Ursule, and asked Sonic to take him there and protect him. Sonic accepted Jari-Pekka's request, and, after having been taken there and reminiscing, Jari-Pekka could recall what he did that night, but not his promise. Distraught, Jari-Pekka considered giving up and giving Ursule another present.

On the day of his anniversary, Jari-Pekka finally remembered his promise to eat his stored-away meat with Ursule and as well where it was located. Not long after, Jari-Pekka ran into Sonic and Chip again, where he explained what he had just remembered, before asking Sonic to fetch the dried meat for him, which Sonic accepted. After Sonic brought the dried meat to Jari-Pekka, he was overjoyed to see it. Jari-Pekka then brought the meat to Ursule, telling her that it was their anniversary and that he thought they could eat this meat together, but was shocked to hear that Ursule had forgot their anniversary. After this, Jari-Pekka met up with Sonic and Chip again and told them of how down he was over Ursule having forgotten their anniversary.

Some time later, Jari-Pekka met up with Sonic and Chip once more and told Sonic that he had finally remembered Sonic's name. As he got ready to say though, Jari-Pekka quickly forgot what he was saying.

Jari-Pekka later watched on in horror with the rest of his village as Dark Gaia began to cast the world into darkness while maturing into Perfect Dark Gaia, but rejoiced as the world returned to normal following Perfect Dark Gaia's defeat at the hands of Super Sonic and the Gaia Colossus.

During the events of Sonic Unleashed, Jari-Pekka encountered Sonic the Hedgehog and Chip when the duo first arrived in Holoska, where he asked Sonic if he was the seal they ate yesterday, though he quickly realized he was wrong and tried to think harder about it.

Jari-Pekka later watched on in horror with the rest of his village as Dark Gaia began to cast the world into darkness while maturing into Perfect Dark Gaia, but rejoiced as the world returned to normal following Perfect Dark Gaia's defeat at the hands of Super Sonic and the Gaia Colossus.

In the Sonic the Hedgehog comic series and its spin-offs published by Archie Comics, Jari-Pekka is a human resident from Artika and the chief of his village. He is also the father of the Gaia Key Guardian Jari-Thure. 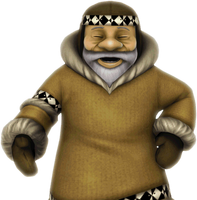