Jakks Pacific, Inc. is an American toy company founded in 1995. Jakks designs and markets a range of products including figures, electronics, role-play, and plush, and has been a licensee of many well known trademarks such as Disney and Nintendo. In 2019, it was announced that Sega of America had started a deal with Jakks to produce toys for the Sonic the Hedgehog series.[1] In 2021, Jakks Pacific renewed the license and started making toys for the 30th anniversary of the series.[2]

On 13 February 2019, it was revealed that Jakks would be making Sonic toys and the product line would be revealed at New York Toy Fair 2019 from 16-19 February. An image accompanied the announcement of four bendable Sonic figures: Sonic, Tails, Knuckles, and Shadow.

The toys shown at Toy Fair included Classic-style plushies of Sonic, Tails, Knuckles, and Dr. Eggman, the bendable figures and smaller disk figures of sprites from Sonic Battle, and a pinball set. The set was based on a Green Hill Zone loop and it was functional with Super Monkey Ball-like sphere figures of Classic Sonic, Tails, Knuckles, Metal Sonic, Mighty and Ray.[3] This would be the first time figurines would be made of Mighty and Ray.

At San Diego Comic-Con 2019, Jakks Pacific held a panel and showcased their upcoming products.[4] New Sonic the Hedgehog products included figures and plushes. The new figures shown were part of the second wave of bendy figures and included Super Sonic, Metal Sonic, Dr. Eggman and a variant of Sonic, all with a release date of spring 2020. Like the first wave, each figure was shown to come with a disk figure which used a sprite from Sonic Battle. These included Shadow, E-102 Gamma, a running version of Sonic, and a flying version of Tails. There was also a GameStop exclusive Sonic in a Green Hill Zone loop spinning package with a release date of fall 2019. A lineup of booster spheres for the pinball set were shown, now with a release date of fall 2019. A second wave of Classic plushes was shown which consisted of Super Sonic, Amy, Mighty and another Sonic, all with a release date of spring 2020.

At the New York Toy Fair 2020, there was a booth for Jakks Pacific, and new Sonic toys were on display. There was the second wave of 7" plush toys, new 20" plush toys, the third wave of bendable figures, new 4" and 2.5" lines of action figures, a playset for the 2.5" action figures and toys for the Sonic movie.[5]

Jakks Pacific's first released figures were bendable action figures with an accessory. Each figure retailed for $9.99 USD, and the first wave released in early August 2019.[7][8] Each figure has bendable limbs allowing for a range of posing, and a spinnable disk figure of a sprite from Sonic Battle. The disk figure is able to unfold and stand with its base, and be folded into a circle to be spun/rolled. These would be the first bendable Sonic figures since Joyride Studios' Sonic Adventure 2: Battle figures and Toy Island's Sonic X figures.

Exclusive to GameStop was a 4" bendable Sonic figure in a spinning loop package for $22.99 USD. The package design is based on Green Hill Zone and features a trail of Rings in the loop. A "face off 2-pack" of Sonic and Knuckles was also released. In 2021, another GameStop-exclusive bendable Sonic figure was released. This package was priced at $14.99 and came with a gold medal, a removable jersey displaying an image of the Chaos Emeralds with the text "GHZ 2020", and a cardboard podium.[12]

A 2.5" line of action figures were released, with each figure retailing for $4.99 USD.[13] Each wave has five unique characters, each with five points of articulation. The figures are compatible with the playsets and diorama packs.

The 2.5" figures started being re-released as checklane versions, each at $4.97 USD.

A Green Hill Zone playset was released in August 2020, which is compatible with the 2.5" articulated figures. Its main play feature is the loop that figures can run around inside of. The set has other features including Rings, a Spring, and pegs for other figures and items to connect to. On September 3, 2020, the Jakks Pacific YouTube channel uploaded seemingly the first TV commercial for their Sonic toys. The commercial advertises the 2.5" articulated figure playset.[23] A similar playset of Studiopolis Zone was later released, as was a diorama set which was a pack of two figures and some accessories.

A playset released of the the first ever toy of the Giant Eggman Robot from Sonic the Hedgehog 2. It comes with a small rubber Classic Sonic figurine in a Spin Attack, and a catapult for launching Sonic. The play feature of the set is that if Sonic can hit the button on the robot's chest three times then the robot's limbs pop out like after it is defeated in the game.

A playset will release of Dr. Eggman's Egg Mobile. It will have five configurations, including the standard mobile, Egg Wrecker, the helicopter form from Egg Drillster, Egg Hammer, and Egg Digger. All configurations can be held up with the included flight stand. The set also comes with two 2.5" figures, being Classic Dr. Eggman and a serious expression variant of Classic Sonic.

A line of 4" articulated figures released and each wave contains four unique characters, with each figure retailing for $9.99 USD. Each figure has about eleven points of articulation, and an accessory of an item from the games that can be used for the 2.5" playsets.

The Jakks Gold line of 4" articulated action figures are enhanced with special finishes and decorations. For now, these are Walmart exclusives.

Jakks Pacific released six booster sphere figures for the Pinball Track Set. The figures are two inches in height, and each in a unique colored sphere similar to the characters in Super Monkey Ball. The first wave of figures consisted of characters from Sonic Mania Plus, including the first figures of Mighty and Ray.

Jakks Pacific released their first Sonic playset for the sphere figures, the Pinball Track Set, which is a playset based on a loop in Green Hill Zone. The main play feature is that the included Sonic sphere figure can be launched by a spring and make it through the loop. The track is made of different segments and includes decorative pieces like Badniks and scenery, allowing for customizable layouts. Six compatible booster figurines were released alongside the set.

7" and 9" plush toys first released in fall 2019, each at $9.99 USD. The range includes a variety of different characters, including the first ever plushes of Mighty, Ray and the Jade Wisp. Also included is the first plush toy of Cheese since the Sonic X line by Sega Prize!.

Two large 20" plush toys of Classic Sonic and Tails were released on 26 August 2020.[37] On their gloves are Velcro, so Tails can carry Sonic while flying. Unlike the 7" line, these plush toys have non-stylized designs, and their eyes, gloves and shoes are made of vinyl.

For the Sonic 30th Anniversary, and in promotion of the IDW comic, a variant of Sonic with a dotted halftone pattern (similar to prototypes with same design) was released as a GameStop exclusive.

In August 2021, Jakks Pacific released the first wave of die-cast toys of characters in their vehicles from Team Sonic Racing, each at $4.99 USD. The toys are similar to the racing toys by NKOK and Jazwares, however, the characters are much bigger than they should be compared to their vehicle.

In February 2021, Jakks Pacific released the Sonic the Hedgehog Collector Edition Action Figure for $49.99. It is a 6" articulated figure of Classic Sonic with eleven points of articulation. Like Tomy's Ultimate Classic Sonic figure, this figure resembles Good Smile Company's Nendoroid Sonic and comes with various swappable parts including three mouth expressions, three eye expressions, and three pairs of hand poses. It also comes with a lenticular display base of Studiopolis Zone.

A Modern Sonic equivalent was released in spring 2022.[39] It includes the same amount of swappable parts as its Classic counterpart, however, it also includes two accessories, being a green Chaos Emerald and Cyan Wisp. The display base and packaging depicts Tropical Resort. 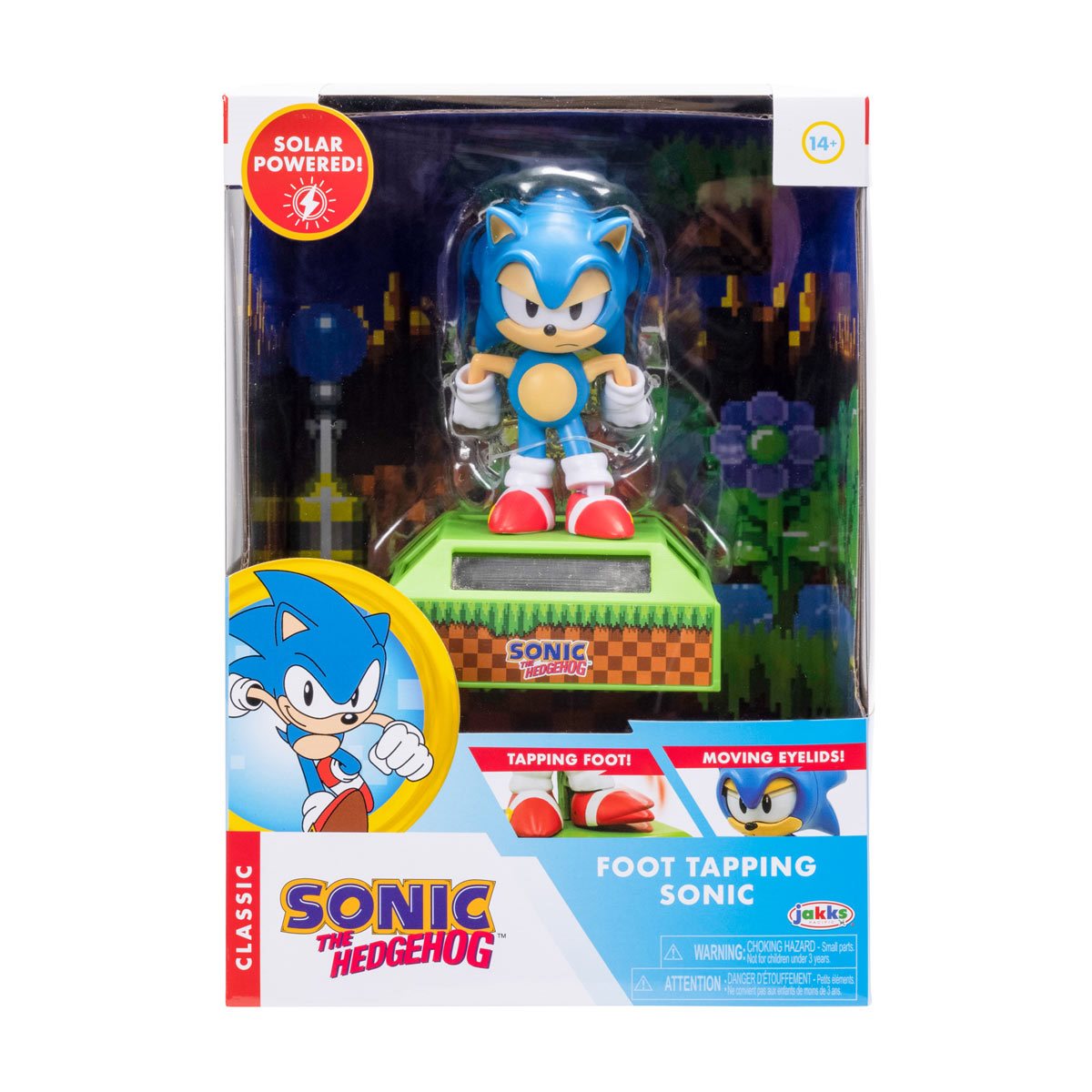 A solar powered 6" figure of Classic Sonic on a Green Hill Zone base was released in May 2022. The figure is able to tap its foot and lower its eyelids like the original idle animation.

Sega of America announced that the Sonic the Hedgehog film would be supported with a range of products, and Jakks Pacific would produce playsets and plush toys. Due to Sonic's redesign, the playset and Baby Sonic plush toy used the old designs, but the packaging was updated.[40]

On 17 February 2021, Sega of America and Paramount Pictures announced they would continue their partnership with Jakks Pacific on making action figures, playsets, plush toys, and other collectibles to coincide with the release of the Sonic the Hedgehog 2 film. The toys were later officially revealed on 23 February 2022.[45]

On 4 January 2022, Jakks Pacific announced a partnership with Sega of America for the upcoming animated Sonic the Hedgehog series, Sonic Prime, Under this partnership, Jakks will produce action figures, playsets, vehicles, plushies, costumes, and other collectibles associated with the upcoming new show on Netflix.