Jacques D'Coolette is a character that appears in the Sonic the Hedgehog comic series and its spin-offs published by Archie Comics. He is the son of Antoine and Bunnie D'Coolette in the Light Mobius universe.

Jacques is a yellow cybernetic coyote with green eyes. Designed by writer Ian Flynn and artist Tracy Yardley, Jacques, while taking after his father's species, derives most of his color scheme from his mother; this was done in response to the common fan complaints that children were often designed as carbon copies of one parent (mothers for daughters, fathers for sons) with no traits from the other. As such, Jacques shares his fur with his mother. Despite these efforts, however, in his first appearance, Jacques was mistakenly given Antoine's exact color scheme; this was largely rectified later, though his face and chest often ended up more peach-colored than their intended white.

Jacques's left arm and right leg are robotic; the arm can be reconfigured as a blade. He wears rolled-up blue pants, a belt, and a light-colored shirt with an open collar. On his non-robotic foot, he wears a boot.

Arriving with his sister Belle to hear King Sonic's celebratory speech on the Five Years of Peace, Jacques was invited to the home of Argyle the Crocodile after his friend caught word of the Dark Presence takeover of Castle Mobius. The two joined Sonic, Argyle, Lara-Su, Skye, and Melody Prower in becoming members of the Future Freedom Fighters, who then stormed Castle Mobius. They were met, however, by the creature Tikhaos, whom King Shadow had unleashed and evolved into Perfect Tikhaos.

Jacques explained about the Ixis Resurgence and how Tikhaos's current state was created. Lara-Su then commanded a direct assault, with Belle and Jacques working together. After Jacques cut off a portion of Tikhaos's arm, Melody saved him from the rest of the arm, and he thanked her flirtatiously. Belle then told Jacques to get out of the path of Tikhaos's attack, but the attack was halted by Silver's psychokinesis. They then grabbed and held one of Tikhaos' arms so that King Sonic could attempt to land one final strike. Unfortunately, Sonic's attack was deflected, but Manik and Sonia suddenly made a second attempt together and were successful. With the danger over, Jacques then joined the rest of the fighters to be "ready for anything".

Jacques is something of a ladies' man, as shown when he introduced himself to Lara-Su by kissing her hand, much to Argyle's disliking, and flirted with Melody. He has inherited his father's sense of honor and respects the King.

Using the jet on his robotic leg, Jacques can fly. There is a blade attached to his robotic arm that can retract and turn into a robotic hand, implying that he is a master swordsman like his father. 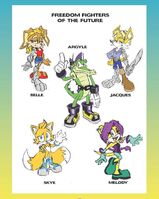