The Ivory Wisp, from the Nintendo 3DS version of Sonic Lost World.

The Ivory Wisp (アイボリーウィスプ, Aiborī Wisupu?) is a creature that appears in the Sonic the Hedgehog series. It is a breed of Wisp that grants the Ivory Lightning Color Power.

Being Wisps, the Ivory Wisps are bright, energetic, and pure of heart. Due to their overall good nature, they easily get along with everybody, except bad guys. Also, rather than aliens, with their floaty movements, they are more like fairies.[1]

The Ivory Wisps are able to levitate in midair at will, which serves as their main method of transportation.

Like all Wisps, the Ivory Wisps are able to generate and store their own unique variant of a powerful energy known as Hyper-go-on inside their own bodies, which doubls as their life source. It is unclear to what extent they can use their own Hyper-go-on.

The Ivory Wisps are able to pass on a fraction of their Hyper-go by phasing into the recipient. When organic beings or robots receive their Hyper-go-on, they can transform into the Ivory Lightning which turns the user into a lightning bolt with electrokinetic abilities. Alternatively, the Ivory Wisps are able to manifest the Ivory Lightning's power themselves without phasing into a recipient.

The Ivory Wisps made their debut in the Nintendo 3DS version of Sonic Lost World. In the gameplay on this version of the game, the Ivory Wisps appear as Item Box power-ups that enable the Ivory Lightning. The player encounters the Ivory Wisps in Tropical Coast, Frozen Factory (where they are first unlocked), Silent Forest and Lava Mountain.

In Sonic Forces: Speed Battle, Ivory Wisps can be spotted along the sides of the racetracks on Planet Wisp.

In Sonic Forces, the Ivory Wisps returned as Wisp Capsule power-ups for the Avatar's Lightning Wispon, which is the only Wispon that will accept them. With the Ivory Wisp, the Lightning Wispon is able to perform its special action for a limited time. The player encounters the Ivory Wisps in Spaceport, Prison Hall, Arsenal Pyramid, Park Avenue, Aqua Road, Capital City, Guardian Rock, Null Space and Imperial Tower.

In Team Sonic Racing, the Ivory Wisps appear as Item Box power-ups on the game's race tracks. In gameplay, the Ivory Wisp power-ups allow the player to target rival racers with bolts of electricity from the Ivory Lightning.

In the comic tie-in, after intruding on a race between Team Sonic and Team Dark, Dr. Eggman would use an Ivory Wisp's power to attack Sonic and Shadow, and maintain his lead position in the race.[2]

In the Sonic the Hedgehog comic series and its spin-offs published by IDW Publishing, the Ivory Wisps are aliens from Planet Wisp. Much like in the games, some of them have settled down on Sonic's world where they help out the planet's inhabitants from time to time. 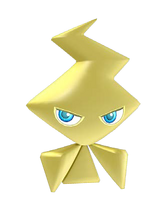