Iron Rotor, from Sonic the Hedgehog #240.

Iron Rotor[1] is a transformation that appears in the Sonic the Hedgehog comic series and its spin-offs published by Archie Comics. It is battle armor made by nanites that Rotor Walrus used during the Second Robotnik War during the creation of Team Freedom. After suffering from a devastating back injury during the Destruction of Knothole, Rotor was left defenseless until he and Nicole created the battle armor, allowing him to go out in the battlefield once more.

After receiving a nasty back injury during the Destruction of Knothole,[2] Rotor Walrus's days of being a Freedom Fighter were finished. Though he signed up with the Council of Acorn shortly after his injury, he still felt weak. When he heard about his family and the Walrus Herd being mind-controlled once more by the Northern Tundra Dark Egg Legion, Rotor decided to take action and asked Nicole to make him a nanite-powered body suit that would allow him to save his family. Thus, Iron Rotor was created.[3]

Upon reaching to the Northern Tundra, Iron Rotor quickly was faced by Silver the Hedgehog, believing that Rotor (or as he called him "Boomer") was the alleged traitor the hedgehog was seeking.[3] However, the two eventually teamed up to stop the Northern Tundra Dark Egg Legion, to which they immediately resolved their fighting.[4]

As the Freedom Fighters disbanded after a series of unfortunate events, Rotor and Sonic proposed the idea of Team Freedom and Team Fighters to the Council of Acorn shortly after Rotor resigned from his council membership rights. Rotor demonstrated his Iron Rotor battle suit to the council, whom approved of the split team ideas.[7] Rotor would then use his battle suit in a number of occasions, from his recruiting process to pick members for Team Freedom,[8] to Dr. Eggman's invasion of New Mobotropolis,[9][10] to the surprise attack at a Forget Me Knots concert caused by Tails Doll,[11] and finally, when he and Team Freedom confronted Tails Doll seconds before the second Genesis Wave struck.[12]

As Iron Rotor, Rotor can now glide through the air, can fire energy beams from his wrists (which leave out puffs of smoke every time he uses them), and allows him to fight once more, as with his back injury he could not before. He also possesses enough strength to knock Metal Tails away.[10] 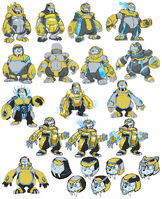 Concept artwork of Iron Rotor, by Ben Bates.
Add a photo to this gallery

Retrieved from "https://sonic.fandom.com/wiki/Iron_Rotor?oldid=2378685"
Community content is available under CC-BY-SA unless otherwise noted.