Shadow in Iron Jungle, from Shadow the Hedgehog.

How do you like my secret base? GUN doesn't stand a chance of getting inside!

Iron Jungle is one of the fifth Stages in Shadow the Hedgehog. It can reached by completing the Hero mission of The Doom, the Normal mission of Sky Troops, or the Dark mission of Mad Matrix.

Using Chaos Control in order to enter the level from either Prison Island or The Doom, Shadow drops onto the steel-plate floors to find himself faced with... himself. The Ultimate Lifeform has popped up right in the middle of a squadron of Shadow Androids. While existentially hazardous, Dr. Eggman doesn't spot him while lecturing the troops on his Egg Mobile. After the Eggman Fleet has been dealt heavy damage by the Black Arms in Sky Troops, Eggman is falling back to his base to formulate a new strategy. However, the Doctor finds himself pursued by G.U.N. forces, which are not wasting an opportunity to attack the Eggman Empire while Eggman is already weakened.

The vanguard of the GUN forces is accompanied by E-123 Omega, likewise determined to kick Eggman while he's down. Omega wants Shadow's help in shooting down the Egg Balloon. Shadow can help Omega, or abet the fat man's retreat by knocking out the GUN forces. The neutral option is to ignore them both and just hasten inside Eggman's base. Regardless of the route Shadow takes, they face the Egg Breaker as the boss. Before the fight, Shadow asks Eggman if he is an android just like those from the start of the level, to which the Doctor lied in telling him "Yes."

The following weapons can be found in Iron Jungle:

The Secret Door is located in a room right after the second Save Point. Upon entering, there will be three robots. Turn around and the Secret Door is right there. Behind the door are three 4-Shot RPGs.

By each Save Point, the player should have defeated the following amounts of GUN Soldiers, Gun Beetles, and GUN Troopers:

Then, circle back to the fifth Save Point and take the top path to find the remaining five enemies

Make sure to have a full Hero Gauge after the first parachuting section. Once at the fifth Save Point, take the top section.

After the fifth Save Point, take the lower Grind Rail to end up riding past the Egg Balloon.

If the Secret Door has been unlocked, take the 4-Shot RPGs and shoot the Egg Balloon while descending with the parachute. Once Shadow is knocked off, out of ammo, or reaches the ground, jump off the platform and fall into the bottomless pit. Shadow will be put back to just before the door, allowing the guns to be picked up again. The Egg Balloon will also have reset, though it will still have all damage dealt prior to dying. This can be repeated as many times as the player has lives for massive amounts of easy damage.

Iron Jungle's Expert Mode features many more platforms than before. If the player hits most of the Save Points by the end of the stage, they will get extra lives.

The boss of Iron Jungle is the Egg Breaker, one of Dr. Eggman's machines. The guide for this battle is Omega.

This boss attacks the player with lasers shot from the machine's eyes, sitting in the center of the arena while doing so. Once the Egg Breaker's Health Gauge is depleted half-way, it will begin to attack with the mace attached to its right arm. 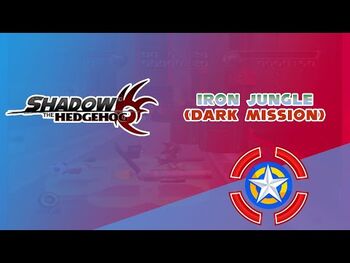 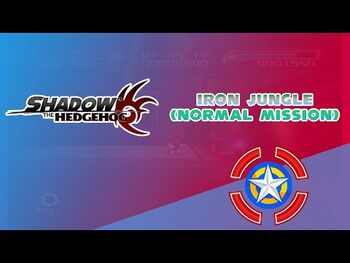 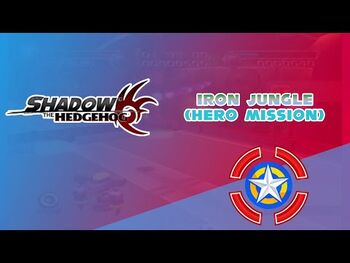 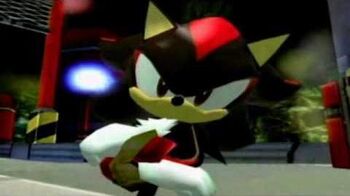