Dr. Eggman in Iron Gate, from the 2012 remaster of Sonic Adventure 2.

The inside of the prison on Prison Island.

Intruder alert! Intruder alert! Security breach at Gate 3! Intruder has been located in the north quadrant, and is moving in the direction of the underground base. All units prepare to engage: basic emergency battle formations. Standard battle formations initiated. Locate and stop intruder from reaching the security area. This is not a drill. Repeat; this is not a drill.

Iron Gate is the first stage of the Dark story in Sonic Adventure 2 and Sonic Adventure 2: Battle, and is playable as Dr. Eggman. This stage takes place within the G.U.N. stronghold on Prison Island.

The layout of Iron Gate is basically the same as repeated process over and over again, with new twists when a room is entered. This stage gives the player an idea of what the future levels are like.

Having read his grandfather's diary which revealed the existence of a top secret military weapon he had invented, Dr. Eggman went to Iron Gate in order to retrieve the weapon and use it for himself in order to conquer the world. When Eggman blows into the Iron Gate on Prison Island, the security systems try to block him off by closing all the metal security doors, forcing Eggman to destroy in order to pass through.

At the bottom of Iron Gate, Dr. Eggman finally succeeds in penetrating the base and finds grandfather's project, codenamed Project Shadow. To his surprise, however, the weapon is revealed to be a hedgehog named Shadow the Hedgehog.

Throughout the level, the security system will alert enemies to Dr. Eggman's presence by announcing the level he is on. The security of the level gets tougher depending on the security level Dr. Eggman is on. Most of the time, the player must try to shoot locks off doors or destroy enemies while on moving platforms.

1st Mission: Get to the core of the military base!

As long as the player does not get hit, collecting 100 Rings in this stage is fairly easy. To so in under one minute and thirty-five seconds, however, requires the player to take a detour when they reach the room with the first level-three doors. Upon entering, the player should walk straight ahead, and they should see a large pipe with a Spring at the end. They should use it to bounce up onto a platform to the left, then destroy the Steel Container to reveal another Spring. The player must then bounce off this Spring and Hover over to the platform on the right. The player will find ten Rings and three Springs which will bounce them up to a pipe above, where there is a row of rings the player can Hover through before dropping back down and continuing on.

The Mystic Melody, Large Cannon, and Jet Engine Level Up Items are required for this mission. To find the Chao, the same detour that is described in the "Collect 100 Rings" section must be taken, but the player should drop down next to the Ancient Ruin instead of back onto the main path. They must play the Mystic Melody near the shrine to cause a series of platforms to appear which lead to a Pulley. The player should ride it into the room above and head around the corner to the right. This will take them to a dead-end where another Ancient Ruin lies. They must play the Mystic Melody again, and a Spring and some more platforms appear. The player can find the Chao on the other side of the platforms at the top level against the center of the wall.

This mission is very easy. The player simply needs to continuously fire and try to destroy the doors before they reach them.

The only significant difference in Iron Gate's Hard mode are the addition of more aggressive enemies and the disappearance of quite a few Rings.

The Level Up Item in Iron Gate in Dr. Eggman's Laser Blaster, although it cannot be reached until the player gets the Large Cannon from Weapons Bed.

In the first elevator shaft, the player must stand on the bridge before the "Level 2" door. From there, Big can be seen to the left, hanging onto the wall further down the shaft. 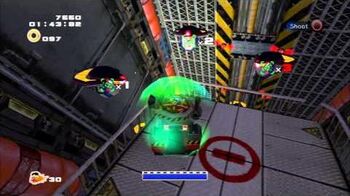 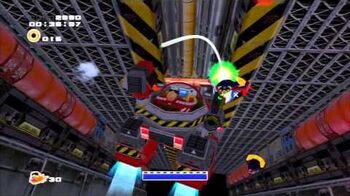 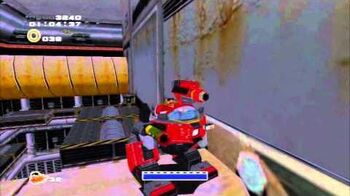 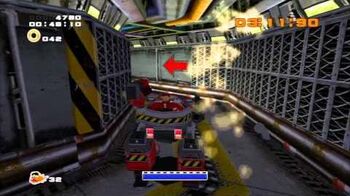 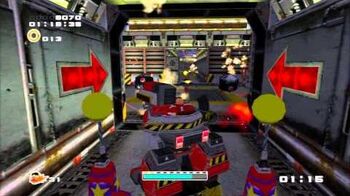