An advanced metal fortress under the control of the Eggman Empire

We have to find the entrance to the Central Tower and stop Eggman!

Iron Fortress (アイアンフォートレス, Aianfōtoresu?) is the twenty-eighth stage in Sonic Forces, and the seventh stage in the game to be played as Classic Sonic.

Iron Fortress is located inside the Eggman Empire Fortress and leads through the lower sections of the fortress. During the events of the game, Classic Sonic came here to look for an entrance into the fortress's Central Tower.

Iron Fortress is set inside the Eggman Empire Fortress, which is located in a barren gray wasteland with similar-looking mountains surrounding it. This high-tech fortification is located in the middle of a deep crater whose edges are surrounded by high walls. These walls extend into the depths of the crater, forming staircase-like levels. Rising up from the center of the crater is the Imperial Tower, a massive high-tech tower. Also, the sky here is completely overcast by gray clouds, and light columns from searchlights can be seen in the background.

The foreground where the player travels consists of floating metallic platforms. Upon further inspection, one can see that the platforms have gears equipped to them. Between the foreground and the background are also floating layers. Each of these layers consist respectively of hexagonal-based frameworks and metal barriers. In addition, the layers are equipped with surveillance orbs, and the metal barriers will sometimes emit red lasers.

With Infinite's demise after fighting Sonic and the Avatar, his Phantom Ruby prototype has left him. When Tails detects that the Ruby is moving underground however, he suspects that Dr. Eggman is up to something. Shadow concurs as he suspects the same thing, knowing the doctor would not give up so easily after losing Infinite and having come so close to winning the War to Take Back the Planet against the Resistance. As such, Tails tells Classic Sonic to find an entrance into the Eggman Empire Fortress's Central Tower so they can stop whatever Eggman is cooking up next.

Although other search parties are on the job as well, including Vector and Resistance soldiers, they have no luck finding an entrance, much to Silver's disappointment. Knuckles on the other hand, is willing to bet that the area Classic Sonic is searching is holding what they are looking for. Knuckles' hunch ultimately proves to be correct when Classic Sonic finds a secret passage into the Central Tower. With that, Knuckles sends reinforcements to infiltrate the tower, including Sonic and the Avatar, to destroy the Phantom Ruby prototype generator once and for all. Amy, on the other hand, is just happy to have two Sonics around.

In Iron Fortress, the main obstacle are Missile Pod Badniks that fire missiles at the player. Other obstacles in this stage include electrical fields that inflict damage upon touch and iron balls that move around in certain patterns. There are also red-lined yellow platforms that will collapse shorty after the player steps on them. In Iron Fortress are also Flywheels, which the player can climb and build up speed on.

Being a Classic Sonic stage, Iron Fortress is played entirely from a 2.5D perspective, and include Item Boxes for Classic Sonic to utilize. In addition, there are invisible Springs that only show themselves when the player steps on them.

When beginning Iron Fortress, follow the path on the right. After passing through an elongated "S" formation in the path, the player will move down a slope while a brief missile barrage comes down from above. After that, the player has to climb a ledge using Flywheels. Shortly thereafter, the player will enter an elevator that will take them up to an auto side-scrolling section. In this section, the screen moves slowly to the right; if the player gets suck on the left edge of the screen, the screen will push Classic Sonic along with it.

While in the side-scrolling section, the player must go to the right, along with the screen, while crossing a challenging platforming segment where bottomless pits and Missile Pods are abundant. The player must avoid all of this as they hop across platforms and flywheels. One mistake here can potentially lead to a fall.

Upon reaching the end of the side-scrolling section, the player will enter an elevator that leads down to a lower path. From there, follow the rightward path. Upon nearing the end of the stage, the player must then cross a bridge that gets bombarded by missiles as the player crosses it in order to reach the Goal Plate; if the player gets hit by a missile along the way, they will fall into the bottomless pit below. 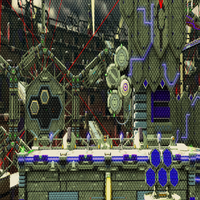