The Iron Boots, from Sonic Adventure 2.

The Iron Boots are a pair of metal heels that can be attached to Rouge's regular boots. Once equipped, they allow Rouge's attacks to destroy iron crates. Using this Level Up Item causes Rouge to leave a pink energy trail. They are the equivalent to Knuckles the Echidna's Hammer Gloves.

In Sonic Adventure 2 at the beginning the stage, the player must head down the red-lighted launch pad and turn on the switch which will activate a rocket on the platform in front of it. It will then take Rouge to the Capsule Planet. This is the only rocket that will take the player away from the "start platform" as it will be the only one without an iron container covering the switch that activates its rocket. This also makes it impossible for the player to take the rocket directly to the Spherical Planet, as its switch will be covered by another iron container.

In Sonic Adventure 2: Battle, the switch that will activate the rocket directly to the Spherical Planet will be the only switch without a iron container covering it, while the switch that activates the rocket to the Capsule Planet will be covered by a new iron container. As a result, when beginning the stage, the player must head down the yellow-lighted launch pad and turn on the switch that will activate a rocket on the platform in front of it. It will then take Rouge directly to the Spherical Planet. The player must then proceed to the metallic building on top of the planet, and the Iron Boots can be found inside. 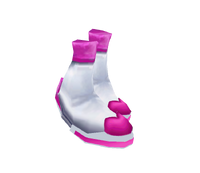