Small golden rings that fit on Shadow's wrists and ankles.

The Inhibitor Rings,[1] also known as gold rings,[2] are objects that appear in the Sonic the Hedgehog series. They are rings worn by Shadow the Hedgehog to restrain his power which he has worn since his creation onboard the Space Colony ARK.

The Inhibitor Rings are golden rings that Shadow the Hedgehog wears on his wrists and ankles.[2] When worn, they limit the amount of innate power that Shadow uses during combat and other situations. When he takes them off, Shadow can tap into his full strength, giving him a drastic boost in power, though at the risk of over-exerting himself.[2]

The Inhibitor Rings cannot be opened; instead they glow and slide off Shadow's wrists as if they are intangible when he removes them, and lock back on when he puts them back on.

First appearing alongside Shadow's debut in Sonic Adventure 2, the inhibitor rings were not named, but at Shadow's presumed death upon defeating the Finalhazard, Sonic gave one of the rings he retrieved to Rouge the Bat.

In the Sonic X anime series, the Limiters also possess their power-inhibiting properties on Shadow since they were first introduced.

The Limiters' properties were first demonstrated when Super Shadow released them in order to send the Space Colony ARK back into orbit. Chris would keep one of them to remember Shadow after he disappeared. During his battles with the Metarex, Shadow would occasionally release his Limiters.

In the Sonic the Hedgehog comic series and its spin-offs published by Archie Comics, the Inhibitor Rings inhibit Shadow's power (in the original continuity they limited his access to the Chaos Force). When Shadow removes them, he can transform into Chaos Shadow. 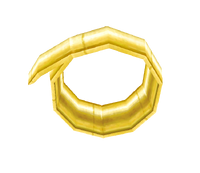