An Indigo Wisp, from the Wii U version of Sonic Lost World.

The Indigo Wisp (インディゴウィスプ, Indigo Wisupu?) is a creature that appears in the Sonic the Hedgehog series. It is a breed of Wisp that grants the Indigo Asteroid Color Power.

The Indigo Wisps have sphere-shaped heads with one violet eye each. They also have three round tentacles stemming from the bottom of their heads, and a small round-tipped antenna on top of their heads. Most noticeably, they have a indigo ring, similar to an planetary ring, around their heads.

Infant Indigo Wisps have shorter and rounder tentacles and a larger eye. Their ring also encircles the tip of their antennas instead of their bodies.

Being Wisps, the Indigo Wisps are halcyon, social, bright, energetic, and pure of heart.[1] They are likewise peaceful, playful, non-hostile and friendly of nature, and enjoy spending most of their time playing with others. Due to their overall good nature, they easily get along with everybody, except bad guys.[1] Also, rather than aliens, with their floaty movements, they are more like fairies.[1] Additionally, while they are not necessarily fighters, they are nonetheless brave and very helpful towards their friends and allies.

The Indigo Wisps are able to levitate in midair at will, which serves as their main method of transportation.

They are able to generate and store their own unique variant of a powerful energy known as Hyper-go-on inside their own bodies, which is their life source. It is unclear to what extent they can use their own Hyper-go-on.

In Sonic Runners, the Indigo Wisps play supporting roles to the main cast. Here, it is revealed that some Indigo Wisps chose to stay on earth after the events of Sonic Colors because they liked it there, and that they have established their own small colonies on the planet. Over the course of the game, Team Sonic comes across the Indigo Wisps several times, whom they often end up saving from Dr. Eggman and/or his lackeys. Occasionally, the Indigo Wisps will also ask the team for help solving different problems, whether it be either Eggman-related trouble or more personal issues. Sometimes though, the Indigo Wisps will help Team Sonic as well, usually by providing information or handling smaller tasks.

In Sonic Forces, the Indigo Wisps returned as Wisp Capsule power-ups for the Avatar's Asteroid Wispon, which is the only Wispon that will accept them. With the Indigo Wisp, the Asteroid Wispon is able to perform its special action for a limited time. The player encounters the Indigo Wisps in Spaceport, Prison Hall, Arsenal Pyramid, Park Avenue, Aqua Road, Capital City, VS. Infinite, Red Gate Bridge, Imperial Tower, and VS. Death Egg Robot.

In the Sonic the Hedgehog comic series and its spin-offs published by IDW Publishing, the Indigo Wisps are aliens from Planet Wisp. Much like in the games, some of them have settled down on Sonic's world where they help out the planet's inhabitants from time to time. 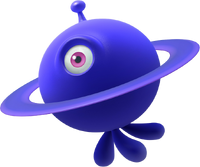 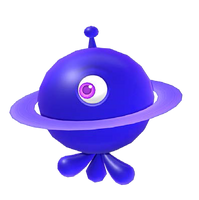