Sonic as the Indigo Asteroid, from the Wii U version of Sonic Lost World.

The Indigo Asteroid (インディゴ・アステロイド, Indigo Asuteroido?) is a transformation that appears in the Sonic the Hedgehog series. It is the Color Power gained by absorbing an Indigo Wisp and its Hyper-go-on, which turns the user into a miniature, but dense celestial body.

When using the Indigo Asteroid, the user turns into an orb-shaped body with striped indigo skin and a matching planetary ring encircling their middle. In Sonic's case, his version of the Indigo Asteroid has his eyes on the front, which are yellow and do not have pupils, and his ears on top, which do not have ear canals.

When using the Indigo Asteroid in gameplay on the Wii U/PC version, the player has the following controls:

, move around with the movement controls, and float by pressing/holding

during a jump. The player can also press the R button to move faster. Pressing

will cause the Indigo Asteroid to descend faster.

The Indigo Asteroid's main weakness is that it can only be used for a few seconds and requires more Hyper-go-on from Indigo Wisps to be maintained. 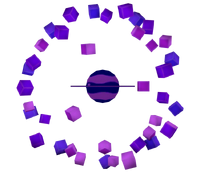