The Avatar in Imperial Tower.

The main tower of the Eggman Empire Fortress

Maybe we need to fight fire with fire. If you can get close enough to that sun, the prototype should cancel out the effect.

Imperial Tower (インペリアルタワー, Inperiarutawā?) is the twenty-fifth stage in Sonic Forces, and the eighth and final stage in the game to be played as the Avatar.

The stage itself takes place inside the Eggman Empire Fortress and leads up along its main tower. During the events of the game, the Avatar came here to keep a virtual sun created by Infinite from destroying the Resistance.

Imperial Tower is set inside the Eggman Empire Fortress, which is located in the center of a barren gray wasteland with similar-looking mountains surrounding it. This high-tech fortification is located in the middle of a deep crater whose edges are surrounded by high walls. These walls extend into the depths of the crater, forming staircase-like levels. Rising up from the center of the crater is the Imperial Tower, a massive high-tech tower with tall metallic pieces forming hoops circling around it. The sky here is also completely overcast by gray clouds. One can also spot Infinite's virtual sun in the sky, which gets closer the nearer the player gets to the goal.

The Imperial Tower is surrounded by floating layers. Each of these layers consist respectively of hexagonal-based frameworks, metal barriers, and metallic platforms, the last of which make up the playable roads. Noticeably, the plaform have gears equipped to them. Also, the layers are equipped with surveillance orbs, and the metal barriers will sometimes emit red lasers.

With less than an hour left before Dr. Eggman launches his endgame to eradicate any opposition to his Eggman Empire once and for all, the Resistance decides to launch one final attack on Eggman at the Eggman Empire Fortress, his final stronghold, to topple his tyranny and win the War to Take Back the Planet. Although they have to win by destroying Eggman's Phantom Ruby, Tails is sad about this, since Classic Sonic will return to his dimension once the Ruby is gone. Despite both his and Amy's sadness, Knuckles and Espio remind everyone that this is the final battle and to give it everything they got to defeat the Eggman Empire.

After some forethought, the Avatar makes their way towards the Imperial Tower under Tails' guidance in order to reach the virtual sun. Meanwhile, Knuckles, Espio and Vector are losing hope at how close they came to winning the war. Although Knuckles urges the Avatar to fall back because the risks are too great, everyone soon realizes that the Avatar is their last hope to avoid annihilation, and begin to cheer them on. Eggman, on the other hand, believes the Avatar's efforts are in vain, thinking he has already won. Reaching the top of the tower, the Avatar jumps into the sun and makes it disappear, just before it hits the planet. Back on the tower, the Avatar collapses from the effort while their Ruby breaks from the feat it just pulled off. Flabbergasted, Eggman can hardly believe this, as he thought he had destroyed all the Phantom Ruby prototypes, only for Tails to come and mock Eggman's oversight while helping the Avatar. The Avatar's feat also gives the Resistance a morale boost as they now know they can still win the war.

Imperial Tower takes place entirely in 2.5D. The stage is composed of individual platforms, often separated by bottomless pits, making travel difficult. Imperial Tower is also the only stage in Sonic Forces where the Avatar can Wall Jump; this is possible in sections where two parallel walls are so close together that they form shafts. By bouncing between these walls with the Wall Jump, the player is able to scale such shafts. Some shafts are blocked by breakable Containers however, which must be cleared out with the Stomp.

In terms of stage hazards, Imperial Tower features blocks that generate damage-inducing electricity between them. There are also purple energy balls that move along the surfaces of platforms and cause damage upon contact; however, the player can either use the Drill Wispon to tunnel into platforms and over the platform gaps, or use the Void Wispon to remove the energy balls. Halfway through the stage, the Avatar will also be chased by a large blue death ray that slowly moves in from the left side of the screen. This laser will instantly kill the Avatar should they touch it.

Like other Avatar stages, Imperial Tower features Wire Targets for the player to swing around on using the Wire Attack, and numerous Wisp Capsules with Wisps for fueling the Avatar's different Wispons. However, any Wisp Capsule containing Wisps that do not match any of the Wispons the player has currently obtained will be rendered intangible and transparent until the player obtains their Wisp's associated Wispon. This means, for example, that if the player does not have an Asteroid Wispon, then the capsules with Indigo Wisps will be unobtainable.

Upon arriving at the tower, the death ray will appear and move towards the player. From here on out, simply keep following the path on the right. When nearing the end of the stage, the player has to run around the tower while the death ray closes in on them from behind. Just before the death ray hits the Avatar however, the player will hit a Spring that takes them to the goal on the top of the tower.

In the Sonic the Hedgehog comic series and its spin-offs published by IDW Publishing, the Imperial Tower is known as the Imperial City. 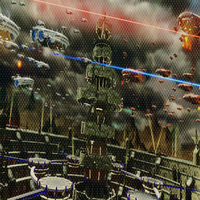