For the Archie Comics interpretation of this character, see Illumina (Archie).

My dream... is... to make Maginaryworld a world full of light...

Illumina (イルミナ, Irumina?) is a character that appears in the Sonic the Hedgehog series. She is the Goddess of Dreams, the guardian angel of Maginaryworld and the protector of the Precioustone.[1] When Illumina lost faith in herself, she split into two separate beings: Lumina Flowlight and Void. These two would subsequently battle one another until they reunited and brought back Illumina.

Having created the Precioustone sometime in the past,[2] Illumina assumed the job of protecting the crystal from her residence in the Temple of Light to safeguard everyone's dreams.[1] However, Illumina was eventually overcome with self-doubt and lost sight of her own dream of making Maginaryworld a beautiful utopia, causing an internal conflict so strong that she split into two beings, each representing opposite ends of the spectrum of emotion: Lumina Flowlight and Void.

While Illumina herself ceased to exist, her two halves lived on. Lumina, having no recollection of her earlier life, believed herself a servant of Illumina, while Void suffered from loneliness. To ease his pain, Void sought the Precioustone, but disbursed its pieces across the dimension when he touched it. Lumina, believing Void caused Illumina to mysteriously vanish, brought in Sonic, Tails, Amy and Knuckles to save Maginaryworld. While Sonic and his friends helped Lumina recover the Precioustones, Illumina would sometimes appear in their dreams and tell them about her own dream.

After rebuilding the Precioustone and subduing Void by converting him into a gem, Lumina was lost in self-doubt when she thought Marginaryworld was doomed despite their efforts. However, Sonic and his friends brought Lumina back to her senses. Lumina then took Void into the Perfect Precioustone and two of them merged back into Illumina. As Sonic and co. prepared to leave, Illumina thanked them for clearing away her doubts and promised that Maginaryworld would become an even better place before sending them home.

Illumina has a warm and mysterious smile. She is very warming and encouraging, capable of filling the hearts of her listeners with joy and warmth using only her words.[1] Her dream is to make Maginaryworld a world full of beautiful light.

When Illumina lost sight of her dream, she was overcome with self-doubt and lost faith in herself. After being reborn when Lumina and Void rejoined however, Illumina regained her faith in herself and her dream.

Illumina possesses a number of unspecified powers.[3] She is also a skilled harpist, filling the hearts of the listeners with joy and warmth with the music from her harp.[1]

In the Sonic the Hedgehog comic series and its spin offs published by Archie Comics, Illumina is a goddess who controls Maginaryworld from where she manages all the dreams using the magical Master Precioustone. She temporarily split into Lumina Flowlight and Void when she succumbed to her doubts, but was eventually restored.

"I'm sorry... I'm the one who lost myself and almost lost my dream..."
—Illumina explaining how she split into Lumina and Void.

"Maginaryworld and people's emotions are fragile. It doesn't take much to crush them... Even the strongest of people have dark emotions in their hearts."
—Illumina about the fragility of feelings and Magiaryworld.

"We must be stronger... Emptiness does not conquer dreams... Dreams conquer the emptiness..."
—Illumina about the dream and emptiness. 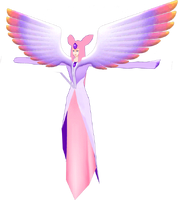