Sonic News Network
Register
Don't have an account?
Sign In
Advertisement
in: Sonic and the Secret Rings bosses, Villains, Genies

This article is about the Sonic and the Secret Rings boss. You may be looking for the Ifrit from Sonic Rivals 2.

The Ifrit Golem is the boss of Evil Foundry in Sonic and the Secret Rings, after being summoned by Erazor Djinn in order to burn the pages of the Arabian Nights. Shahra refers to it as "a djinn that controls fire", although it appears to be mechanical.

The Ifrit is summoned in the Evil Foundry by Erazor Djinn after he destroyed half the pages of the 1001 Arabian Nights. He reveals to Sonic and Shahra (who broke into the Evil Foundry knowing Erazor was planning something there) that he intended to let the Ifrit burn the remaining pages in the book. The Ifrit Golem is initially invincible, and although Sonic displays his first use of Time Break here, he is forced to escape and locate the Water Blue World Ring. Having found the Ring, Sonic returns and manages to defeat the Ifrit.

When it is defeated, the Ifrit drops a bomb, which Sonic takes outside of the Evil Foundry so that it can explode safely. The bomb releases the Red World Ring when it explodes, leaving Sonic wondering if the djinn had the World Ring (and the rage that the ring contained) inside of it the whole time.

The Ifrit Golem possesses pyrokinetic abilities, such as creating a wall of fire via the laser beam it shoots from its eyes. It can also summon explosive canisters as well.

The Ifrit can use many attacks, such as firing an eye laser that does not hurt Sonic directly but creates a flame wall, dropping tanks of gas when Sonic goes near its hands, and (later in the battle) dropping into the molten metal within its cauldron. It would also fall into the cauldron if Sonic successfully attacked all the lights on its hands, in which the Ifrit would be helpless for a time long enough for Sonic to perform a few homing attacks (or Speed Break) on its head. The Ifrit would not surrender until Sonic performed fifteen homing attacks or Speed Break on its head, causing it to fall into the cauldron and melt in the burning magma. To get the Gold Medal for this boss, the player must finish it in two minutes. 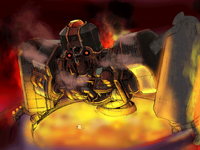 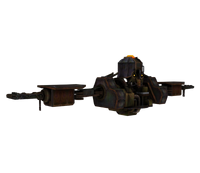