Ice Paradise is the fourth Zone of Sonic Advance 2.

Ice Paradise is an icy city situated in an arctic region. It contains slides and yellow-and-white walls that the player can run on, as well as constructive flooring and paneling. There are also what appear to be construction signs telling the player which direction they should take. It seems that the locals of the nearby city (or possibly Eggman) are building over the icy mountain region, as several man-made structures can be seen and interacted with throughout this Zone.

After rescuing Tails in Music Plant, Sonic continues his journey through Ice Paradise to find Dr. Eggman while being followed by both Cream and Tails.

This course has ice slides that can dump the player into bottomless pits if they do not jump at the end. Not all slides are dangerous however, as a rare few of them may be connected to a wall or blockade to stop the player's movement. Lots of rails litter this Zone to help the player grind over the mountaintops. spin rings are also in ample supply as to help guide the player over to the high grounds or over the many pitfalls situated within this Zone.

Starts a straightforward path with rails, ramps, slopes, and spin rings. The first four Special Rings can be found by searching the higher areas. The fifth one is located before the checkpoint, but on a slightly lower pathway. Once past the checkpoint, the difficulty increases as there are more pitfalls now available. Timing jumps is necessary here. Dash Rings are available to those who jump at the right moment, and will aid players in reaching the higher grounds. The end is necessarily a climb to the top.

This Act may feel a little more safe, but not all pitfalls have vanished. Act 2 is built more for high speed, as loops become more abundant here compared to the last Act. Despite multiple pathways, the Act is pretty straightforward. Players need to gain enough speed to have the boost spheres launch them to higher (and safer) grounds.

The boss of Ice Paradise is the Aero Egg, a modified Egg Mobile resembling a floating robotic snake whose cockpit is connected to three spiked spheres, which in turn are connected to a small platform. Over the course of the boss battle, the Aero Egg typically drops bombs in an attempt to defeat the player. It can also shoot missiles.

In the Sonic the Hedgehog comic series and its spin-offs published by IDW Publishing, Ice Paradise is one of the several locations found on Sonic's world. Its past is virtually identical to its game counterpart's, up until after the events of Sonic Forces. Silver once came here to evacuate Ice Paradise himself from a Zombot outbreak, but the Zombots eventually caught up with the escape shuttle and claimed all of the civilians. 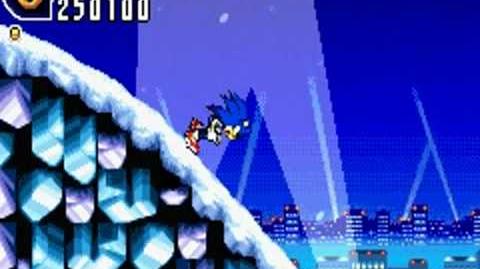