An icy mountain with elaborate caverns

Things will get pretty chilly as Sonic and Tails slide their way through this arctic wasteland. Be sure to smash open blocks of ice to reveal power-ups and hidden passageways.

The background of IceCap Zone frequently varies. At the beginning is a snowboarding sequence which features snowy mountains in the background with snow-topped trees on the steep hills. After that, the majority of IceCap Zone Act 1 takes place inside icy caverns, where the background is cold blue and black in color with huge pillars. On the ground, there are many blue and green decorations with spinning ice cubes on top of them. Some of them are transparent pillars, while there are also ice cubes and familiar colorful diamonds on the cold hard ground. There are also steep and slippery ravines, which can loop endlessly. At the end of IceCap Zone Act 1, the background now have a river in the background with ice mountains and sheets of ice floes moving via parallax scrolling with snowflakes falling down.

In IceCap Zone Act 2, the background is the same as in the end of IceCap Zone Act 1 but morning breaks and the snowflakes are gone. The outside sections are faster in pace, with different loops and ramps that can send the player to higher pathways depending on how much speed they have built up. There are also twisting underground tunnels, which lead to lower pathways with ice caverns that have deep water sections. Both the outside and cavern sections have bridges where several pathways fuse together into the main path.

Using a regular Cannon in Carnival Night Zone, Sonic and Tails would launch themselves to the mountains of IceCap Zone as they continue their pursuit of Dr. Robotnik to prevent the re-launching of the Death Egg. After a skiing section that takes them into and though many caves, they meet Robotnik who uses his Egg Froster to attack them. After beating the doctor, Sonic and Tails travel though some underground tunnels in the snow to reach Launch Base Zone.

In the locked-on version, Knuckles uses a teleporter to travel from Carnival Night Zone to IceCap Zone to have another encounter with the Eggrobo that has been plaguing him in every Zone he has chased it through. After beating the Eggrobo's Egg Froster in the Zone, Knuckles continues to follow the robot to Launch Base Zone through some underground tunnels in the snow.

There are many gimmicks in the game that have been affected by the Zone's climate. Many of the primary objects in the game, such as monitors, Springs and switches are frozen inside of ice blocks that the player must first break before being able to utilize them. Some of the ice blocks can also be completely empty. Switches are used to break blankets of snow or reveal columns and pathways.

If the player comes across a stack of four ice blocks, they can Spin Dash through to destroy the lowest block and use the rest of blocks as platforms to reach higher paths. The player can also surf on platforms down the slippery ravines while breaking ice walls. Some platforms also float on the water surface in Act 2. There are platforms connected with green chains to walls that will move in the direction of an upper arch if the player has gained enough speed. Act 2 also features purple trampoline gimmicks on columns that can send the player higher by pushing down and then up on the D-pad.

Spikes featured in this Zone are icicles that are a part of the Zone's structure instead of regular white obstacles. Some sets of spikes on ceilings are loose and will fall off down to the ground if the player runs past them. There are also sets of spiked icicles on walls and bigger, sharp icicles that can function as platforms after they fall down into a field of spikes, although the sharp part of icicles can still damage the player. Many ice pillars function as crushers which are usually set in hall sections. If the player goes above or touches them, they will begin moving and crash down to the ground or up to the ceiling, before moving back to their original position. There are also Snowblowers set on the ceilings which can freeze the playable character when they get close. Should the player be playing with both Sonic and Tails however, one of these characters can Spin Jump into their frozen partner to shatter the ice encapsulating them and free them. IceCap Zone Act 2 also features snowbanks that can slow down the player when they attempt to walk through them. By using the Spin Dash or having enough speed built up however, the snow will evaporate along the way.

As for shields, Thunder Shields are the most common, can help with tricky jumps in Act 1, dissolve the Star Pointers' ice balls, and hit the Act 1 boss with ease, making it very useful. The Aqua Shield 's Bound Jump is near useless, as all the water areas are bottomless, so its drowning protection serves no purpose. The Flame Shield serves no purpose here either.

IceCap Zone Act 1 starts with an over fifteen second-long snowboarding sequence if the player is playing as Sonic. The sequence is automatic, as the player is only able to jump by pressing

on long, steep hills with many lines of Rings lying on the path. There are sections where the player will automatically swerving around large mounds by temporarily separating from the main path to gain Rings. After the sequence, Sonic will crash into a solid ice wall, which causes him to fall off his snowboard, and fall down into some caverns with an avalanche involved (this happens immediately when playing as Tails).

After entering the ice cavern, there are three major slippery ravines which are endless. In the first one, the player has to pick up the platform on the left wall and use it to get through the ice wall. At one point, the player must quickly roll in between two moving ice pillars in order to progress. In the second ravine, the player has to push a sliding platform near a Star Post on the left side of the pathway to slide through another ice wall. On the third ravine, the player must use swinging platforms to reach a higher pathway, while they need to gain enough speed and jump carefully through the ravine to another swinging platform. After this section, the player exits the ice cavern to the surface, where they will face the sub-boss.

In the locked-on version of the game, Knuckles can take an alternate pathway after the first endless ravine which features a large room full of floating icicle spheres. In particular, Knuckles starts out the Act in the caverns that Sonic and Tails fall into after exiting his teleporter. The player must then glide through the holes between icicle spheres without touching them in order to access the lower part of the room. After passing through the third ravine, Knuckles takes a lower pathway to progress into a deeper room, where he encounters the sub-boss.

In IceCap Zone Act 2, the player can take several pathways through the upper parts of the Zone to progress. To do this, the player must gain enough speed to launch the playable character into the air from ramps. Act 2 is also more fast-paced than the previous act, with many smooth hills and loops. Several loops lead into twisting tunnels by breaking ice blocks below (similar to loops in Hill Top Zone). There are also many lesser pathways in the lower part of the Zone, which are located in icy caverns. Act 2 has small water sections which are mostly bottomless water pits. The player must use the purple trampolines to get to the higher parts of the icy cavern. At the end of the second Act, there is a hidden passage in the upper part of the Zone that takes the player to a hidden room full of Rings, which has another path to the boss arena. There are sometimes deep snowdrifts on the paths that can slow the player down, but the snow is easily brushed aside if impacted with a Spin Dash.

Knuckles starts IceCap Zone Act 2 in the lower section, as he goes through his own challenging pathways. In the end, however, he reaches the same pathways as Sonic and Tails do at the end of the Zone.

The sub-boss of IceCap Zone is the Big Icedus. It appears at the end of IceCap Zone Act 1 where it descends into the arena. There, it summons seven ice blocks around it for protection and begins flying in a "U" shape across the screen once or twice. The player must hit it right after it throws the ice blocks into the air, which will then fall down in a certain pattern.

Dr. Robotnik appears in his new creation, the Egg Froster, which spews chilling ice flames in a few different directions, one in the front of his Egg Mobile, one in the opposite direction, and the other on the underside of it, above a small rising and descending platform with spikes on the bottom. Robotnik will hover across the arena, releasing ice flames from the dispensers. After he has attacked with the cannon located on the underside of his mobile, this is the chance to attack. After a few hits, the small platform will break and he is forced to descend, leaving it easy to attack from the front as attacking from the rear is inhibited by the leaking gas from the tanks used for the platform dispensers. 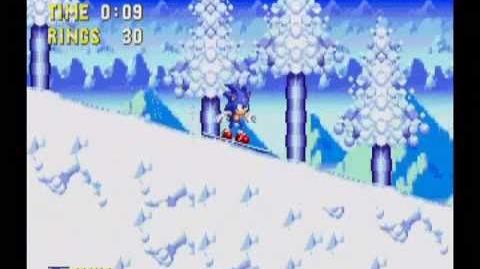