The Iblis Taker, from the console/PC version of Sonic Generations.

The Iblis Taker (イブリーステイカー, Iburīsuteikā?), also known as the Taker,[1] is an enemy that appears in the Sonic the Hedgehog series. It is a type of fire-based creature amongst Iblis's Minions that is capable of flight and limited pyrokinesis.

The Iblis Takers look like phoenixes made of red and orange lava, crossed with some bat attributes. Rather small, the Iblis Takers have wings resembling those of bats with a claw on their joint. Their eyes are dark-green, and they have two ears that curve backward, similar to horns. They also have a long tail with a pear-shaped tip. When there is no enemy in the vicinity, their bodies glow more faintly.

In the console/PC version of Sonic Generations, the Iblis Taker is less skinny and has shinier red skin, as opposed to in Sonic the Hedgehog (2006) where its body looks like it is covered in black dust.

In Sonic the Hedgehog (2006), Iblis Takers can either attack with fast small fireballs, dive bomb for a melee strike, or fly themselves into the player (the latter leaves them temporarily paralyzed if they miss). Iblis Takers often hover over wide spaces, making them perfect “stepping stones” for crossing over gaps using Homing Attacks. If the Iblis Takers are in a group, they will stay away from the player to focus their shot at the playable character.

Occasionally, an Iblis Taker's command system will be linked to other members of their species, which makes the Iblis Taker serve under a leader. If its leader is destroyed, however, the Iblis Taker will be destroyed as well.[2]

In the console/PC version of Sonic Generations, Iblis Takers appear as enemies. In this game, they are found in Crisis City. In gameplay, they have the same attributes and attack patterns they had in their debut game. Notably, during the Challenge Acts, Iblis Takers become more aggressive with their attacks. Also, when the Iblis Takers are flipping in midair to launch a fireball, Sonic will take damage when trying to hit them with a Homing Attack.

Like Iblis' other minions, the Iblis Takers are completely mindless and only exist to cause destruction wherever they are. 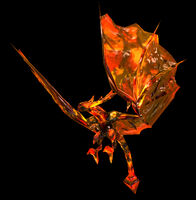