The Iblis Biter, from the console/PC version of Sonic Generations.

The Iblis Biter (イブリースバイター, Iburīsubaitā?), also known as the Biter,[1] is an enemy that appears in the Sonic the Hedgehog series. It is a type of fire-based creature amongst Iblis's Minions, and by far the most common form of its kind.

The Iblis Biters are lizard-like creatures made entirely of red and orange lava. They have hardened armor on their head, back and limbs. Their head armor in particular resembles a shark fin. Despite their reptilian shape, they maneuver more like canines.

In Sonic the Hedgehog (2006), Iblis Biters crawl on the ground and walls like lizards. They can also jump on enemies and breathe flames, which they can direct. They usually seen in groups. They are the least powerful enemies out of Iblis' minions, taking only one hit to destroy.

In the console/PC version of Sonic Generations, the Iblis Biters appear as enemies. In this game, they are encountered in Crisis City. Additionally, the player can unlock a statue of it in the Statue Room.

Following the 20th anniversary of the Sonic the Hedgehog series, a Jazwares figure of the Iblis Biter was released for the first time alongside a Silver the Hedgehog figure in 2011. The label on the box was incorrectly spelled "Lblis Biter" instead of "Iblis Biter". As of 2012, the spelling has not been corrected despite the fact that Jazwares added a new sticker to cover the 20th Anniversary logo from the box (since Sonic's 20th anniversary ended). 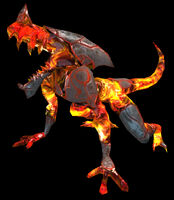 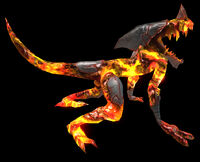 Sonic the Hedgehog (2006)
Add a photo to this gallery