A seaborne fleet of G.U.N. airship carriers and battleships

Huge Crisis (ヒュージクライシス, Hyūjikuraishisu?) is a Zone in Sonic Rush. It is the fifth Zone for Sonic and the sixth Zone for Blaze. Like most other Zones in Sonic Rush, Huge Crisis consists of two normal Acts and a separate Boss Act devoted to the local boss. It takes place at sea, onboard several G.U.N. naval aircraft carriers.

This zone takes place on several G.U.N. naval aircraft carriers and battleships out on the sea. As such, various G.U.N. mechs such as the Gun Hunter appear as enemies as opposed to Badniks.

After having their blocked path opened by Knuckles, who was venting his frustrations over his last encounter with Blaze, Sonic and Tails make their way to Huge Crisis. After traversing through the Zone, Sonic encounters Eggman Nega in the Egg Hammer Fortress. During the ensuing battle, Sonic manages to defeat Eggman Nega. Eggman Nega then leaves in his Egg Mobile, promising not to forget this. Sonic tells him to wait, but is ignored. Afterward, Sonic and Tails come across Blaze and her guide, Cream.

Having departed from Sonic and Tails after declining the former's offer to aid her with her mission, Blaze leaves with Cream and heads for Huge Crisis to find the last two missing Sol Emeralds. Arriving in the Zone, Blaze makes it to the end where she finds Dr. Eggman in his Egg Hammer Fortress. Defeating Eggman in the ensuing battle, Blaze sends him flying in his Egg Mobile with a fiery kick, which causes Eggman to drop the turquoise Sol Emerald. Grabbing the Sol Emerald, Blaze watches contently as Eggman flies into the distance. Afterward, Blaze and Cream come across Amy once again.

Throughout the level, the player advances using pipes and mechanical cranes, as well as steam-catapults on the ship decks. It also includes hazards like crushing pistons and jets of steam. The pistons will kill the player instantly if they are caught between it. Similarly to Mirage Road, as well as the usual fast-paced sections, there are rooms that trap the player inside. The player must defeat a set number of robots that appear to advance.

When playing as Sonic, Special Generators appear throughout this Zone which can warp the player to the fifth Special Stage for a chance to collect the grey Chaos Emerald. As Blaze, the cyan Sol Emerald can be found after defeating the boss.

The boss of Huge Crisis is Egg Hammer Fortress. It is fought at sunset on the deck of a docked G.U.N. battleship. To defeat Sonic or Blaze, the boss will use its head to try and pulverize them, but because the head is also the cockpit, this move leaves Eggman or Eggman Nega vulnerable to an attack. It will also occasionally drop its head and use the ship's cannons to fire missiles, either aiming at Sonic or Blaze or in a completely random pattern across the stage. 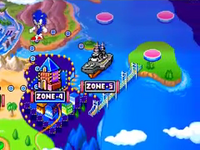 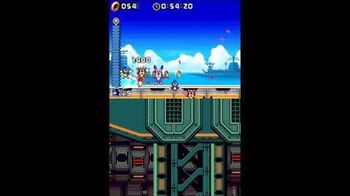 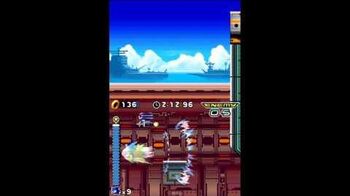 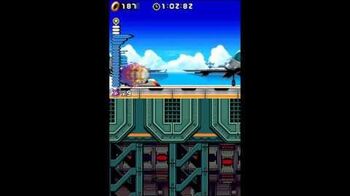 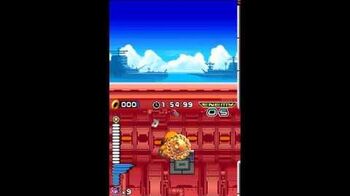