The Hover Wispon, from Sonic Forces.

A blaster that uses the power of a Green Wisp.

Blow away enemies with a shockwave.

The Hover Wispon[1] is an object that appears in the Sonic the Hedgehog series. It is a Wispon that is themed after the Green Wisp. The Hover Wispon can be used by Avatar, allowing the character to blow away Badniks, as well as float through midair.

Like when using an actual Color Power though, the Hover Wispon is activated by the Green Wisps' cooperation, meaning it cannot be used by users that the Green Wisps do not like.[2]

In gameplay, the Hover Wispon allows the user to attack with frontal midair shockwaves. These shockwaves have a wide range, allowing the player to take out multiple Badniks in one shot, and can move through platforms. By obtaining a Green Wisp, it also allows the player to ride it like a balloon through midair for a short time. This ability is especially useful for escaping bottomless pits that the player is about to fall into.

The basic Hover Wispon is unlocked by defeating Infinite in his final boss fight in the Eggman Empire Fortress. By advancing through the game, the player can unlock different variants of the Hover Wispon. These variants all have the same basic functions, but offer additional skills to the player when equipped:

In the Sonic the Hedgehog comic series and its spin-offs published by IDW Publishing, the Hover Wispon is a Wispon tool from Sonic's world. 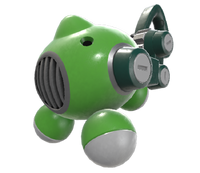