For the move in Sonic Boom: Rise of Lyric/Sonic Boom: Shattered Crystal, see Hover (Sonic Boom). Not to be confused with Green Hover.

Hover[1] (ホバー[2], Hobā?), also known as Hovering[3] (ホバーリング[4], Hobāringu?), is a move that appears in the Sonic the Hedgehog series. It is a technique that allows the user to hover above the ground while slowly descending.

Hover was first used by E-102 Gamma in Sonic Adventure and Sonic Adventure DX: Director's Cut after obtaining the Jet Booster. When equipped, the player can hover by pressing and holding the jump button while in the air.

In Shadow the Hedgehog, the Hover is usable by the player when piloting the Jump Vehicle.

In Sonic the Hedgehog (2006), the Hover is used by E-123 Omega. In this game, it functions like E-102 Gamma's Hover, although it was performed using boosters built into Omega's back. In addition, the Hover briefly holds the player in the same position before descent in gameplay. Players can exploit this by repeatedly pressing the jump button to freely move around in the air without descending. This move can be used to pass boundaries in the game and explore new places.

The Burst Hover is a move exclusive to Blaze the Cat. The move is performed in the same manner as the Hover; however, the Burst Hover can only be used for about five seconds each time the player is in the air, after which the player will fall helplessly. 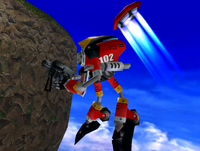