The manager of the "Don Fachio" hot dog mega-franchise's Shamar location. Always reliant on the kindness of strangers, he gives back to the community via his tantalizing turkey dogs made with twenty plus different herbs and spices.

The Hot Dog Vendor (ホットドッグ屋, Hotto Doggu-ya?) is a character that appears on the Xbox 360/PlayStation 3 version of Sonic Unleashed. He is a human resident of Shamar who manages the local Don Fachio hot dog stand, a worldwide hot dog mega-franchise, which is simply known as "Don Fachio's Shamar". Just like his co-workers, he is a skilled hot dog cook.

The Hot Dog Vendor's specialty is the Sandy Dog (砂かけホットドッグ, Sunakake Hotto Doggu?, lit. "Sand Spread Hot Dog"), a type of customized Chili Dog that has a gravelly, yet complex flavor, and which gives Sonic the Hedgehog seventy Experience Points when eaten. He will however only sell these Sandy Dogs to those who can clear his Mission. In the game, he hands out Missions for Sonic to clear and rewards him with up to three Sandy Dogs if he manages to pass them.

The Hot Dog Vendor's missions revolve around testing the player on the basic gameplay found in Sonic Unleashed. His mission sets are split up between Sonic the Hedgehog's gameplay and Sonic the Werehog's glameplay, which can be accessed during their respective time of day.

In the Sonic the Hedgehog comic series and its spin-offs published by Archie Comics, the Hot Dog Vendor is a local resident of Shamar. He met Sonic while he looked for Ehsan, but could not help him with his search. 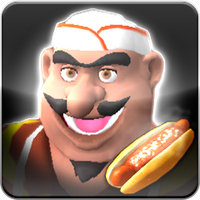 Shamar's Hot Vendor's achievement, "Kebab on a Bun" for clearing all his missions.

The Hot Dog Vendor in Shamar's Town Stage on the Xbox 360/PlayStation 3 version of Sonic Unleashed.