The manager of the "Don Fachio" hot dog mega-franchise's Eggmanland venue. Despite being the toughest guy in fast food, he makes a hot dog so classic it tastes nostalgic even at first bite.

The Hot Dog Vendor (ホットドッグ屋, Hotto Doggu-ya?) is a human resident of Eggmanland who appears on the Xbox 360/PlayStation 3 version of Sonic Unleashed. He works at Don Fachio, a worldwide hot dog mega-franchise, and is the manager of Don Fachio's local hot dog stand in Eggmanland, which is simply known as "Don Fachio's Eggmanland". Just like his co-workers, he is a skilled hot dog cook.

The Hot Dog Vendor's specialty is the Doggone Dog (まじうまホットドッグ, Majiuma Hotto Doggu?, Seriously Tasty Hot Dog), a type of customized, yet classic Chili Dog that lacks any special traits, unlike his other co-worker's Chili Dogs. It still tastes good though, and gives Sonic seventy EXP points when eaten. He will only sell these Doggone Dogs to those who can clear his missions. In the game, he hands out missions for Sonic to clear and rewards him with up to three Doggone Dogs if he manages to pass them.

The Hot Dog Vendor's missions revolve around testing the player on the basic gameplay found in Sonic Unleashed. His missions are easily the most difficult of the Don Fachio's hot dog missions due to the sheer difficulty of passing through Eggmanland's only stage without losing a life. 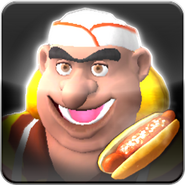 All of the Hot Dog Vendors together as seen during the ending credits.
Add a photo to this gallery

The Hot Dog Vendor in Eggmanland's Town Stage on the Xbox 360/PlayStation 3 version of Sonic Unleashed.